So, the continuing story of the painting of Axis and Allies Anniversary edition.

I started with Ze Germans when i kicked off this project, and well, im not that happy with the results of some of the models. 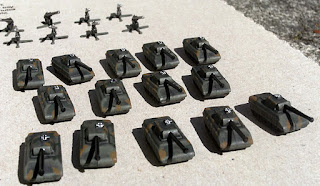 The Infantry look fine, and i'm quite proud of the aircraft, but I really wish id taken the time to do the flags on the German capital ships. It would have been a nice touch, but by the time i'd finished painting them all I couldn't bring myself to go back to the beginning and make tweaks. I later based the infantry with some standard flock as well.
The primary colours used in this set are

One thing to note on these guys is that I didn't use a single transfer. Just a lot of patience. I found the key to doing good German symbols was to paint a solid white cross first and then do two sharp lines in black. Painting over the top in black is much easier than trying to border it in white.

I'll be looking at the Russians next, a force where some people said "WHY THE HECK DID YOU EVEN BOTHER TO PAINT THE SHIPS"

The answer to that question, and many more next time.