Well, this last month or so has been an unpleasant one for my group and I.

My sister lost her battle with cancer just after New Years, one of my other players has had to deal with a major family crisis, and another the death of a friend.

All in all, 2016 started off horribly for my friends and I and Talathen Sector takes a fair bit of work on my part, and focus from my players. This is something we have been without, so when we have met up, we have played games like roborally and Blood Bowl Team Manager instead. And that's been fine.

Things are starting to calm down a little, so i'm going to write up our last session from last year. Hopefully, next week we will be focused enough to get back into it. 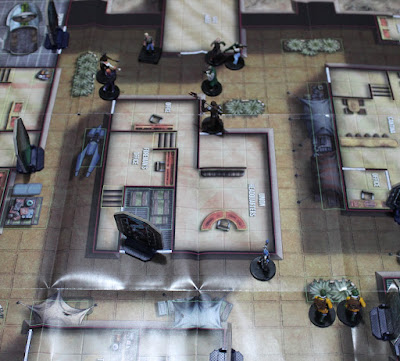 Just a few words on this one as it was a purely narrative mission, designed to introduce a plot point more than be an actual challenge for the players

It was set on Nimbala, with the rebels dispatched to capture a member of the Czerka board who had been located on Nimbala.

This board member was revealed to be "The Red Queen", a character introduced in the first RPG mission, a former Twilek slave from Nimbala who had married a member of the Czerka board.

She revealed that her plan has been to destabilize Czerka on Nimbala, buy up shares in the subsidiary as the price nose dives, then purchase a controlling interest, kick Czerka out, and liberate her people while placing herself as a self-appointed ruler.

Viewing this as the far lesser of two evils, the rebels have agreed to help.

A lot of characters up for bid and a minor faction as well. After meeting the Bothan Spynet in the last RPG, they have become available. it's worth noting that the Chief of Staff NPC does not like Bothans, and all Bothans have the "shady" negative to represent his antipathy for them. 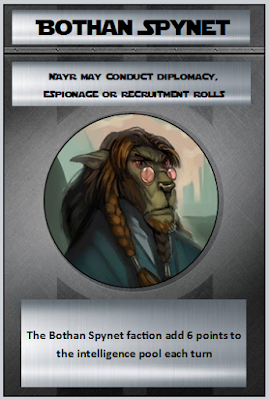 First up for bid was Nayr Bwa'tu and the Bothan Spynet, a powerful alliance that adds considerable grunt to the intelligence pool and comes with a powerful leader. 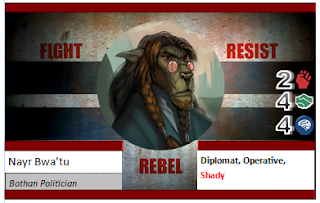 Next up, was the unusual Pell family. As a married couple, these two characters come as a set, with Leeto being a smuggler and Jorda being a gunslinger.

The peoples movement picked them up for 22 clout, 11 each which seems pretty reasonable. 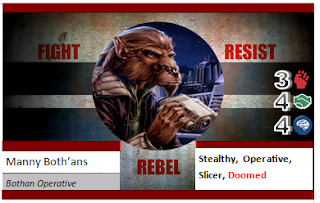 Manny Bothan's, Bothan super spy and generally all around powerful agent. Manny is phenomenal at spying missions and the most powerful spying character in the sector.

The downside of him is that he is doomed to die before the end of the campaign. After all, he needs to find the plans to the 2nd death star, so Mon Mothma can say "Manny Bothans died to bring us this information"

Yes..... the entire character is based on a bad pun :)  A whopping 27 points to the Republicans, who have loaded up on Bothan spies this round. 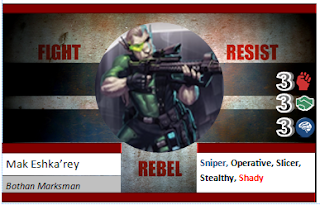 Mak Eshka'rey is next, a truly useful character who can fight in Imperial assault squads, work as an intelligence officer, or be sent off on solo assassination runs.

22 points to the Luxon militia, I must say I was surprised at this, but clearly the players have plans and want the right people to fufil them. 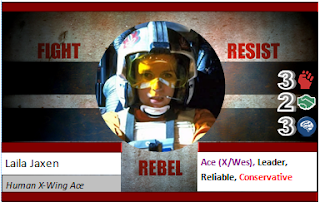 Laila Jaxon becomes the first human for hire this round, in a round dominated by Bothans.

As a Wes Jansen ace, she has excellent pilot skill and in game abilities, while being an ok squadron leader.

14 points to the Peoples movement, who continue to stockpile military characters 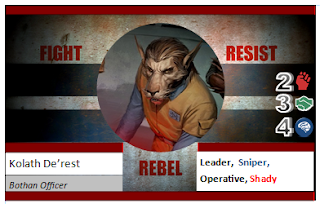 Kolath De'rest is next. Another utility character who can be a good officer, imperial assault squad member, intelligence operative, or any form of command role. 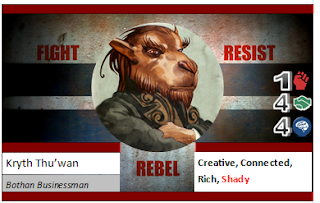 Kryth Thu'wan is next, a solid leader character, but not a fighter. He could be a real asset in many fields, but probably not combat ones.

Stolen for only 10 clout by the Luxon Militia. And while i though they overpaid for Mak, this cheap deal more than overcompensates for that. 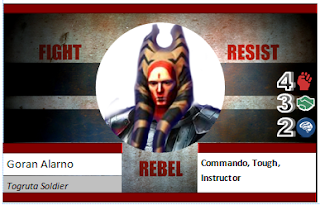 Goran could move into training immediately, or he could be deployed to the special forces teams who are in need of a 2nd commando.

As this is round 4, glory scores per event have gone up by 25%, and will do so every 3 turns until the end of the game. The People's movement nearly top scored this round, and are closing the gap to the Luxon Militia and Republicans, while the Basra Consortium continues to play a long game. 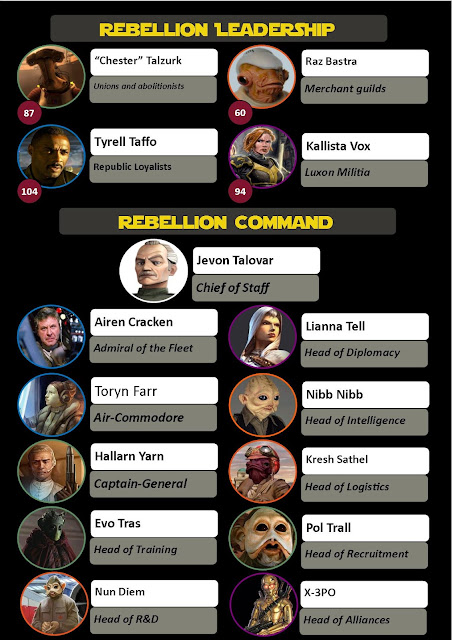