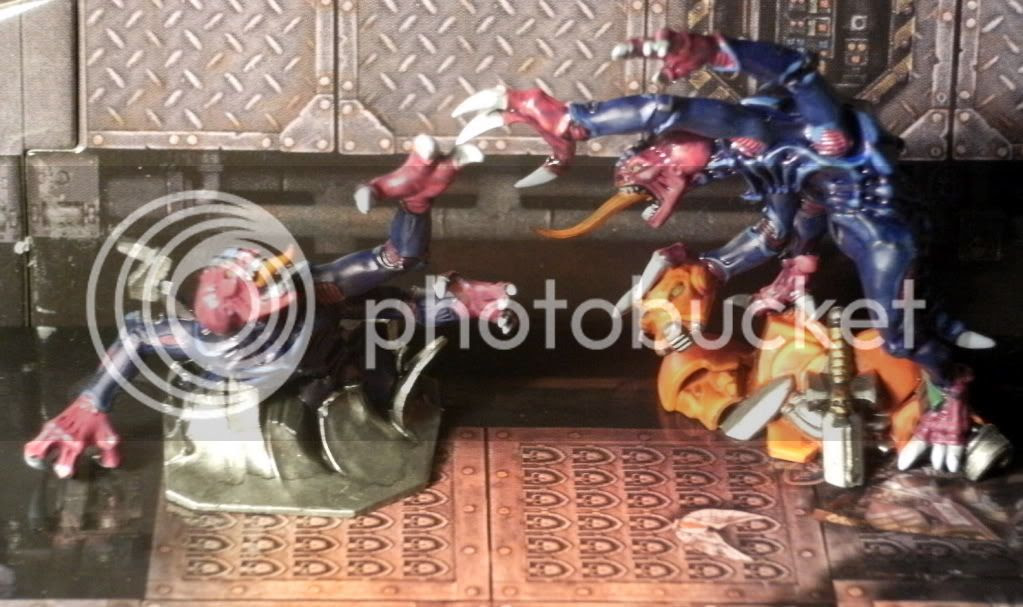 Just a quick post to show off the Genestealers from my copy of Space Hulk.

I'm half way through painting these chaps and have started painting the terminators again. I must say the process of "properly painting" models is a time consuming one. I use so many short cuts these days that when I actually try to paint well, its takes rough FOREVER to get anything done. 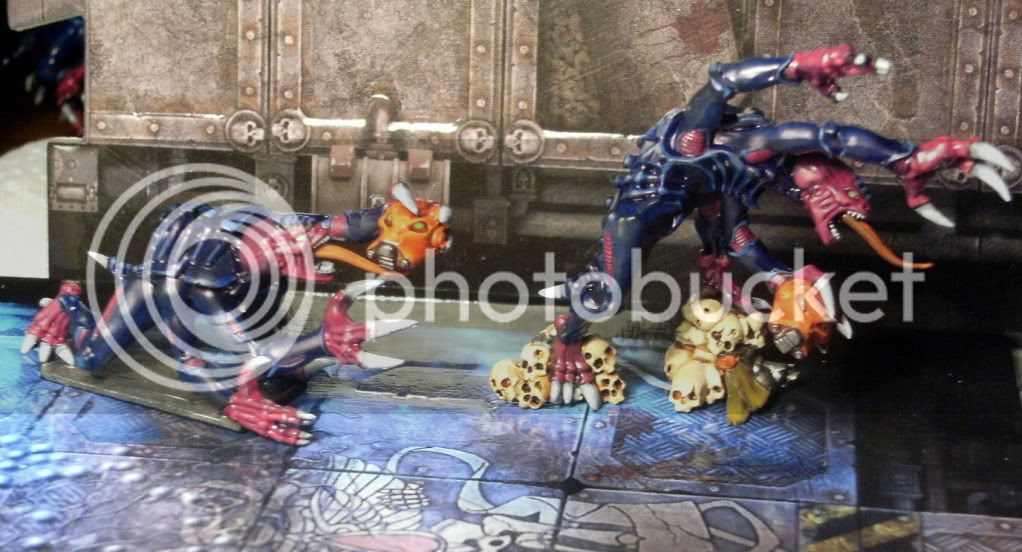 These Genestealers were actually finished many moons ago, but i never posted pictures of them for some unknown reason. They probably just got lost in the shuffle while I was posting pictures from all the other boardgames I've done.

Looking back at them I must say i'm quite pleased with the results. It's a rare thing to look at an older model and say "you know, that's not too bad".

Anyway, hopefully this week I can bring you pictures of the 2nd terminator squad. I've only got the thunder hammer sergeant left to do, but the prospect pf painting his stupidly ornate shield fills me with dread. 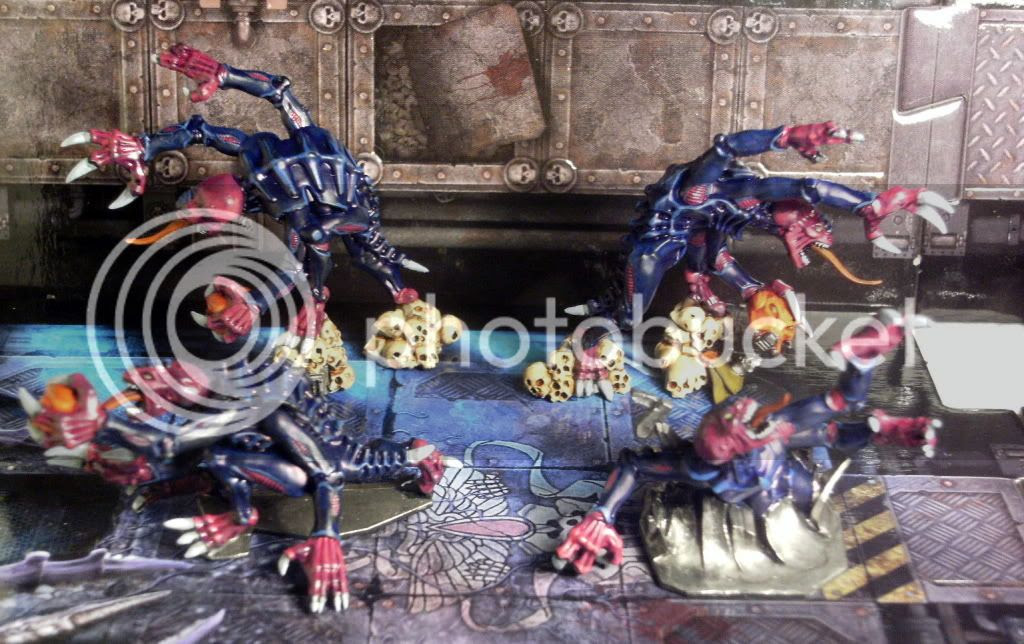 Posted by Vomkrieg at 23:12 No comments:

Horus Heresy - The game, not the books...... no not the forgeworld one, the other one. 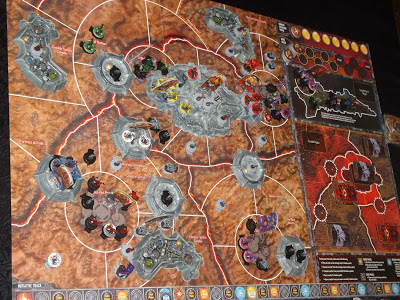 Well, for an IP (The Horus Heresy) that has a bucket load of fans, very few people have heard of this game.

I put that down to a few things, but mostly on the fact that its largest target demographics weren't advertised at.

It didn't appear in any GW stores, because they only sell their own product. By that, I mean they only sell the products they produce themselves, not anything licensed  That stuff has to stand on its own merits. 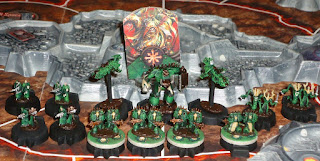 In some ways that's a real pity as those people who get their gaming news and information only from GWstores, White dwarf and 40k only blogs (screw you Ron) have missed out on some real gems of boardgames produced by FFG. Death Angel is pretty fun and Chaos in the Old World is a master piece. It's a bit of a shame really.

The second major demographic would be the fans of the Horus Heresy book series. This is a huge selling series and some of them are a damn fine read (Especially the Dan Abnett ones). I own a fair few of the books and I never did see a link in advert for this game. Oh right, that's because they are published by GW and they don't offer any support to other companies using their IP.

It's a shame that this game has largely been overlooked, and by many accounts was not a financial success. It has some pretty clever mechanics (The initiative system and order system are both very good, as is the treatment of the Primarchs) and seems to replicate the epic nature of the siege of Terra quite well.

The models are passable, if a little on the mediocre side. Its a real pity there aren't any nice Primarch models, but I guess they probably weren't allowed to do that. 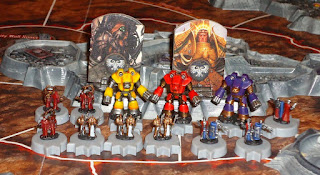 I do have one gripe about the game. It's not "historically" accurate. I know that sounds ludicrous as its a fictional conflict, but in order to get some game elements in they messed up who was actually fighting the siege of Terra.

The loyalist chapters are all there and all correct, the White Scars, Imperial Fists and Blood Angels. They really do form the core counter attacking force for the Imperial player and each legion plays thematically. Dorn and his fists are great attacking or defending fortifications, Sanguinius and the blood angels hit like a 18 wheel truck, and Khan and the White Scars can move rapidly to support attacks all over the place.

Where it falls down is on the chaos side. You see, in order to have the 4 Chaos powers represented they fudged the Legions that were at the Siege of Terra slightly. There are no "Sons of Horus" models, which i find truly bizarre. You would think the first legion to be included in a game about the Horus Heresy would be the Sons of Horus.

The focus is on the four chaos powers and their associated legions. So the Word Bearers and Iron Warriors, along with their Primarchs do not feature at all. It's a minor gripe, less so than when i initially thought that some of the Primarchs included in the game (Mortarion and Magnus) were actually absent.

The Traitor legions do work well and are quite thematic. Angron and the World Eaters are excellent on the offence, not so good on defence, Magnus the Red shoots massive bombardments out of his evil red glowing eye, Fulgrim corrupts imperial army units and Mortarion makes every enemy unit weaker (Hes pretty much as OP as anyone in this game).

I've only run a "theoretical" game at the time of writing this, I look forward to having my first "practical" game in the near future. As a project it was quite fun to paint, and, as you can tell, I didn't go overboard with detail. Drybrushing was my friend :)