Getting to know your Stormwall 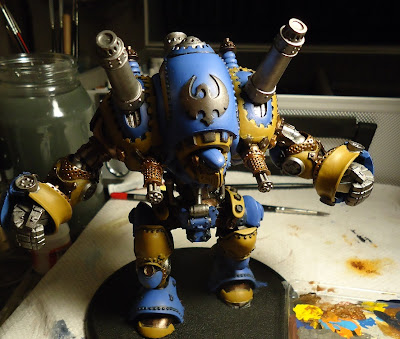 He's large and in charge (and still being painted) but I learned on Tuesday night that the Stormwall is not unkillable, in fact he can be quite the opposite.

You see, having a model this prominent in your force means that every single debuff available to your enemy can be placed on one impossible to hide target.

In one round my poor Stormwall was subject to Gormans Blind Oil, Denegras feat and Parasite spell, and something else debuff related.

It ended up on -6 Def, -7 armour and -2 to all other stats, and having to forgo its movement AND activation.

After all that it still managed to absorb almost all the enemies firepower for 2 rounds only exploding late in the second round of attacks to a pistol wraith.

The lesson is simple, kill them debuffers as soon as you can.
Posted by Vomkrieg at 23:20 2 comments:

Ok, so its not the Babylon 5 movie i'm going to talk about (Even though I did quite like the film and the Crusade series had potential.... but that's another rant for another time).

No, A Call to Arms is our big local wargaming tournament, convention thingy. From all accounts (well, Sicarius who's running Warmachine at the tournament) it looks like Warmachine will dwarf all the other games systems being played.

40k will officially be Warmachine's bitch in the region.

Not that I really dislike 40k as a game that much, I just like Warmachine a lot more these days.


I have a crash course in speed painting ahead. I must admit that getting a new PC has killed the amount of time spent blogging and painting. Simply put I have a massive new screen and an awesome PC so I've got to play all those games I've been wanting to play for ages.


I'm pretty close to finalizing my lists for the event. In the next month I need to paint the following


I have 30 days to get this all sorted.  I'm glad the My-Sky is loaded with crappy TV to keep me company while I do this.

Please, kill me now, before I go painting blind.
Posted by Vomkrieg at 18:09 No comments:

So my friends decided to challenge me to a three on one 99 point game of Warmachine this weekend.

Each of them took 33 points with the Megapope fielding Khador led by the butcher, The Millarnator with his Menoth lead by pKreoss and Mr White with his mercs commanded by McBain.

The guys are all pretty new to the game, so this was less of a serious "BATTLE FOR SUPREMACY" and more of an learning experiment for all involved.

The scenario was straight forward, three flags along the center line, 1 point for being within 1" with no enemies with 4", 1 bonus point if your caster is within 1" of the flag and first team to 7 points. Team rules applied so you kept playing after your caster died until all three were dead.

I figured I was going to be staring down the barrel of a lot of heavy armour and I wasn't wrong. My three forces were Siege backed by 2 Defenders (one on jnr) and Centurion with ranger support, pHaley with Thorn, strider, Minuteman and Hunter (jnr) and Constance with Gallant, Stormclad and a bunch of knights.

My plan was to slow the mercs in the middle of the field with haley while Siege wrecked the Menoth advance with his heavy weapons. Constance was to rush headlong into the Khador forces and hopfully swing around to support the middle ground. I deliberately deployed the center under strength in order to carry the flanks.

How did it go?

I positioned Siege and the Defenders in such a way that they could take advantage of Haleys feat early on. The Millernator used his zealot mini feat early when i was mostly out of range. Once that was over Siege and the rangers (all with double attacks from haley) wiped them off the board. The Defenders then proceeded to start to slag the incoming heavy infantry and jacks. Sieges feat turn compounded the issue and after 6 defender shots and Siege firing 5 times in 2 turns (thanks reinholdt) the heavy Menoth march of the left flank collapsed. Without a screen Kreoss was vulnerable to the Defenders on turn 5..... the ranger who ran up beside Kreoss probably didn't help.

Total wipe out on the left flank but the Millernator learned a bunch of things. forexample, he used his minifeat when I was out of range. The turn he popped it I may have been lucky to get more than a Defender shot or two at him. I may have got Siege to ground pounder them but that would have required me to break cover. Zealots are a great screening unit, if he had held back I would have had to deal with all those fire bombers between my jacks and the flag.

He also didn't move Kreoss one turn which left him WAY out of position and unable to capitalize on his feat.

And the big thing, having to remember what all your units do. A lot of card checking by everyone as they get familiar with their forces. 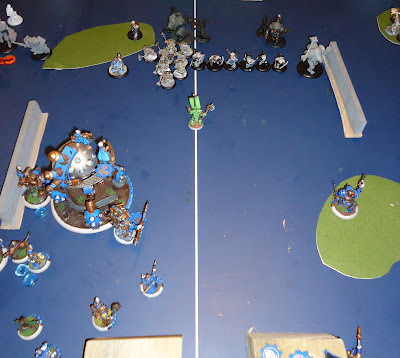 Mr White held the center and scored 3 or 4 vps holding the flag for most of the game.

His force was a mix of merc jacks and solos with heavy dwarf infantry. While solid and hard to kill they had a hard time dealing with the temporal barrier and the storm strider.

A nice combo he pulled was on Thorn. He quickly moved his Buccaneer with energize to position a net attack (who was ready to disengage) and then smashing it to pieces with a massive pile of dwarven hammers (Thorn had parked in front of the Strider in an attempt to buy it one more turn)

In the end Arcane Shield + Barrier + Strider + Mechanics proved a time consuming slog for the Mercs and when reinforcements came from the left flank the centre folded. (Siege being able to ground pounder at targets in melee with no penalty is fantastic when someone is trying to engage your battle engine in melee)

Mr White and I have played a half dozen games in the last few months as he gets to grips with the game (Most games ive used different casters and combos to try them out for the first time). I'm sure he wants me to throw haley and the strider in the rubbish bin by now.

Right flank or how I met a brick wall

My right flank plan was solid. You can see to the right exactly the moment I popped Constances feat. 20+ infantry, right in front of the Khador formation. I was expecting to take a fair number of casualties and then dump a massive amount of focus in transference and start carving.

Then Mr White says "you know, I tried attacking him when he did that last time and it sucked.... just hold fire"

So that's what the Megapope did.

He casually advanced up and parked his Kodiak in front of the precursors, backed that with his Behemoth and shield walled his Man o Wars.

What was supposed to be a lightning war bogged down into a grimy battle of attrition.

In the end Constance murdered the butcher using her flanking bonus from gallant but that really shouldn't have happened. Megapope spent WAY to much focus on the behemoths sub cortex trying to do trick shots instead of just pounding those heavy jack to pieces. He left the Stormclad with an operation cortex and sword when he could have spent that focus reducing it to scrap with additional pow 12 armour piercing attacks.

My right flank could easily have collapsed and rolled back on me. I'm sure the Megapope is lurking in his cave of wonders thumbing through the Khador book and thinking of ways to foil me.


I don't recommend doing this too often. Trying to run a 3 caster battleplan across a big table while teaching aspects of the game and doing most of the "to-hit, to-damage roll" calculations for people is mentally draining.

It was fun, don't get me wrong, but my brain was exactly the same way you get after a tournament... you know.... numb and monosyllabic.

I think their will be a rematch in the future and next time.... i'm taking a conquest and three different casters.

Well its been a long time since I've done a proper post but thankfully most of the craziness that has been distracting me for the last month is behind me now.

So I thought it would be best to start back with the biggest model I've ever painted.

I mean seriously, how cool is the freaking Storm Strider. I feel bad for some of the other Warmachine Factions..... especially Khador and their funny little horse cart.

So far, my opponents have not being happy to see this thing across the table from them.

Putting it together was tough, the model is a mix of resin and metal parts that required a lot of drilling, pinning, gluing and additional support from green stuff. At various point I've been unsure if the thing would stay together for very long. Needless to say, I don't plan on dropping this thing from any height whatsoever.

Transporting it to games has also been a pain in the butt. If anyone has an affordable transportation suggestion I am all ears. (So far everyone has just told me to throw it in the rubbish bin)

As a paint job it was remarkable easy. With all those big areas you could put the first two coats on really quickly without having to worry about getting paint everywhere. The painting guide in the Wrath book was also helpful in doing some nice touches like the swirls in the energy socket bits..... whatever those things are.

Probably the neatest thing about painting this model was having that big base to play with. I decided to experiment with some sculpting with some positive and negative effects. On the good side the craters, boulders and water effects look pretty good (I used a citadel water effects bottle I got for half price).

The wall however, looks a little sad.

Anyway, fun paint job and no where near as daunting as I expected. I am actually looking forward to getting a Stormwall now.

Coming up...  Stormclad and Stormknights and Vom-Krieg takes on three people at Warmachine at once!
Posted by Vomkrieg at 20:39 5 comments: