Picking a faction - A NOOBs guide to Warmachine part 2

Picking a faction for Warmachine

As I said in the previous post, don’t rush into this. Play some games with friend’s models, learn the basics, read up on the factions and find what suits you best.

I recommend starting small, with a battlegroup or warpack and building up your force relatively slowly. This will allow you to get a feel for what you like to play and not waste buckets of cash on models you won’t use.

I’ll run through the factions quickly to give you an idea of what they are about. Consider this a starting point to look further into making your own decision. Actually…. That’s a good point. Make sure you play what you want to play and not what you’re told is “SUPER OMG AWESOME POWERED”. 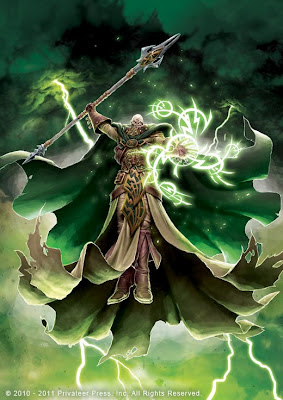 I'll briefly talk about each faction, I won’t talk at much length about the warlock/casters as.... well... they are all so individual. There really isn't a "standard generic" caster for any faction. I'll just talk about some broad themes, and in some cases I’ll be dead wrong as I'm not an expert.

Why would I play Circle?

If you like the idea of a hard hitting, fast moving force the Circle Orboros could be perfect for you. Also, if you like pagan blood rites and/or Morris dancing these guys could be right up your alley. 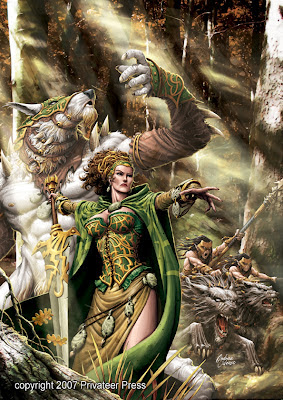 The imagery for the Circle Orboros is made of a mixture of Celtic Druids, Werewolves, Barbarians, Tree Monsters, Hunters and Miniature Stonehenge’s.

They are pretty much medieval eco-terrorists. If you like your models looking feral and barbaric, these guys are the way to go.
How do they Play?

The Circle is all about speed and controlling battlefield terrain. Many of their troops have pathfinder, which allows them to move through rough terrain quickly. The Circle has ways to create forests on the board, slowing down their opponents but not themselves. They also have some ways of quickly moving troops around the board, such as teleportation stones.

Circle beasts fall into two categories, fast and deadly (living) or slow and tough (constructs). Their infantry focuses on speed and accuracy over heavy armour and firepower.

Circle are considered a "high skill" faction by many people, as many units fall into the "glass cannon" category. Amazingly effective when used well, but if unsupported, they die very quickly. 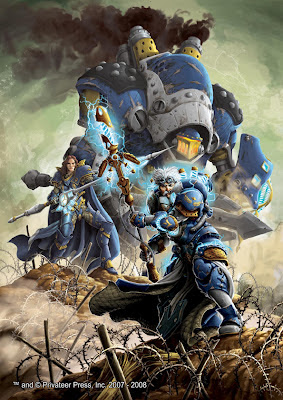 Why would I play Cygnar?

If you like ranged firepower and high tech weapons, Cygnar is the faction for you. If you ever think “this unit would be much better if it had more guns… and lightning”… then Cygnar is the one for you. Also, if you like putting your fingers in electric sockets and have a picture of Nikola Tesla on your wall…. You’re probably a Cygnar player.

Cygnar troops are a mix of Gritty World War I style ground pounding infantry, pistol wielding trenchcoat wearing Gun Mages, medieval knights and dudes wearing electrical power armour. That sounds like an odd mix but it does work. Just think of technology as another form of magic and its fine.

Cygnar Warjacks have similar themes, ranging from gun platforms through to shield carrying/spear wielding melee monsters. Cygnar jacks tend to be quite mobile and moderately armoured. Their best traits are usually high tech kit, like massive guns or electrical projectors.

You can play a Cygnar army full of melee troops, but it would be non-typical. Cygnar’s strength is with its guns. The key thing to understand is that you probably won’t shoot anyone off the board. Your firepower should be used to whittle down the opponent and snipe out the key targets. The key is to inflict enough damage with your firepower to win the assaults that come after.

Cygnar tends to have expensive units too, guns come with premium pricing and you will almost always be out numbered. Cygnar are also pretty good at killing opponents Warcasters, as all that ranged firepower can easily be brought to bear on one target. (Note, this is how I win all my games as Cygnar, seems I suck at scenarios with complex rules but can kill casters) 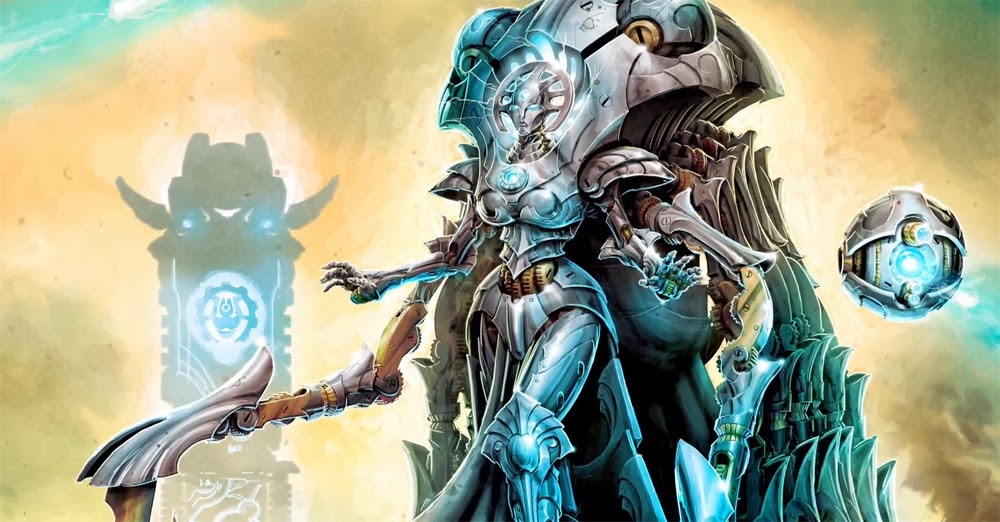 Why would I play Convergence? (CoC)

When you watched the Terminator, Battlestar Galactica and the Cybermen from Dr Who, were you cheering for the robots? Does the idea of a ordered society ruled by the law of SCIENCE! appeal to you? Do you really like the imagery of Metropolis?

If you answered yes to the questions above you are probably already worshiping Cyriss the Clockwork goddess and should pick up a damned army.

It's worth noting that PP have said that CoC is not a "main" faction and may not be getting as many updates as the others in the future. If the idea of having a list that will expand slower than others appeals, then CoC sounds like a good option for you. Also good if you just want to get in on the newest thing, 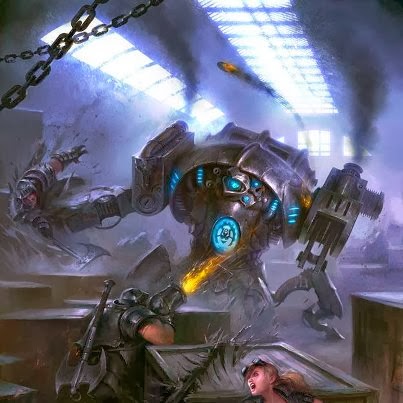 Yep, its pretty much an entire robot army, but that has a lot of possibilities from tiny killer robots, to colossal killer robots.

They also have some breathtaking winged models as well.

From my limited exposure to this list it's hard to say much more than this.

They seemed to be quite jack focussed and their jacks stats and abilities change based on the Warcaster. They are extremely focus efficient compared to most other Warmachine factions as they can pass off some focus to another jack when they spend it. Coordination and timing of attack sis integral to the CoC game style. They don't seem to be a faction where you can really run off models by themselves to do wacky things.

Beyond that, I can't comment much more until i play them some.

Cryx
Evil techno-necromantic undead with a side helping of piracy

Why would I play Cryx?

Are you a ruthless evil bastard? If you answer YES, YES I AM, AND I HATE PUPPIES! Then Cryx is certainly a faction for you.  Cryx is a high risk/high reward faction with a list of dirty tricks as long as your arm. If Resurrecting forces, making them invisible and incorporeal, launching magic attacks from any angle, cursing and using people souls and corpses against them sounds like a good time, then Cryx should appeal. 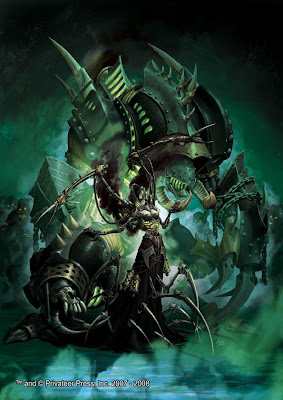 The undead of the Iron Kingdoms are a little different, there’s a lot of steam powered necromancy, big dark gothic soul engines and undead with mechanical parts. They also have a good number of nautical themed units to appeal to those of you who wish to play “Ghost Pirates”

There is a Gigeresque biomechanical feel to most of Cryx. Machine and dead flesh merged into horrid monstrosities. 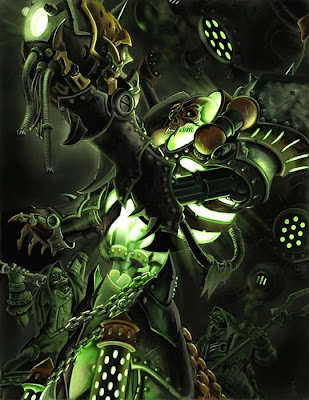 Cryx can play many ways and have many many options. Speed and numbers are two major strengths and Cryx can overwhelm with hordes of undead that refuse to stay down. They also have a lot of stealth and ghostly (incorporeal) units that are incredibly hard to deal with for some armies.

A lot of Cryx powers are fuelled by corpses and souls; the more the kill the more powerful they become. This can lead to some devastating combos and Cryx Warcasters running around with godly amounts of power. They also have a high level of resurrection and replenishment mechanics. Sometimes, you have to kill a Cryx trooper a lot more than once.

They also have these fast moving annoying little Warjacks called “bonejacks”. A lot of bonejacks have these things called Arc Nodes that allow their Warcaster to cast spells through them. This allows casters to sit back and use their bonejacks to attack from any number of annoying angles. 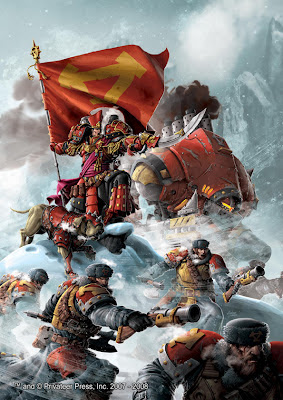 Why would I play Khador?

Consider the following scenarios and contemplate your response.