Galaxy in flames - review and comments 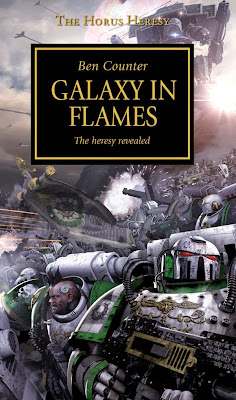 Having recovered from his grievous injuries, Warmaster Horus leads the triumphant Imperial forces against the rebel world of Isstvan III. Though the rebels are swiftly crushed, Horus's treachery is finally revealed when the planet is razed by virus bombs and Space Marines turn on their battle-brothers in the most bitter struggle imaginable.

Well….. first of all I’d like to point out that the text in this book is considerably larger than the previous two: That should be an indicator of what is to come.

This should be the climatic reveal of Horus’s treachery, culminating in the battle on Isstvan III between loyalist and traitors. Unfortunately, it fails to deliver any major emotional impacts when it really counts.

Horus murdering all the remembrancers after gathering them together to watch the virus bombing was…. Moustache twirling evil for the sake of evil. It lacked any emotional impact and was just a box ticking exercise.

The virus bombing itself was well described and the battle within the Dies Irae was one of the few times there is pathos in the book. But in general, it just pussies out at the wrong times.

There is a lot of fighting in this book, and a lot of “action sequences”. Sadly, it just feels like someone reading a Michael bey script

Loken needed to die, on-screen, heroically clinging to his honour and spitting blood in Abaddon’s face. THIS DOES NOT HAPPEN. Sure it looks like it’s about to happen but then the building collapses and Horus bombards the site from orbit. I can only assume this was to deliberately leave it open for Loken to return.

ANY SCENARIO WHERE LOKEN RETURNS WILL BE KACK!

This being said, Loken loses his spot as hero-protagonist in this book. This book is more about Saul Tarvitz than it is Garviel Loken. Tarvitz discovers the virus bombing, Tarvitz warns everyone and then leads the final battle while Loken is off on a personal mission.

Tarvitz is also alive and kicking when the bombardment “that wont leave any survivors…. Honest” falls.

I have no idea why you would have Abbaddon and Lucius triumph over Loken and Tarvitz on-screen. The good guys don’t get beaten, they get bombed, and ultimately that is a lame way to end the book.

Sinderman and Keeler again have a great story arc, showing off the first “saintly” powers in the 30k setting and teaming up with Iacton Kruze, a refreshingly portrayed Space Marine Officer (for one, he doesn’t spend every scene telling you how good he is at fighting)

However, the fight on the Dies Irae is one of the redeeming moments in the book. Cassar was a bit of a smug, sanctimonious git, but the personal betrayal he suffers manages to have 10 tiems the gravitas of Horus’s betrayal. A fried stabbing another in the back while weeping about it has a lot more emotion than pressing the “BOMB ALL THE THINGS” button.

I’m also glad the human characters get to go on more wacky adventures.

This should have been the defining end to Lokens arc, but Loken just bumbles through this book. Saul thinks, Saul acts, Saul beats Lucius and generally bloodies Horus’s nose while Loken gets all emo about it.

Saul is also about the only Space Marin captain who stops and thinks “Should I run head first at the enemy with my sword screaming…. Or come up with a plan first?”

For being the only Space Marin officer in this book to act as though he has a basic understanding of how to fight a war, he gets my MVP 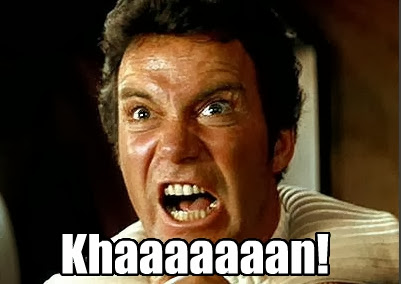 Abaddon finally gets beaten out by someone even crapper than he is. Kharn, as depicted in this book, is a joke.

First off e is all jovial, then he’s a frothing loon, then LOKEN PINS HIM TO A TANK THAT DRIVES OFF WITH HIM AS A HOOD ORNAMENT??!!?!?!

Dishonourable mentions to Horus Aximand (yes I get it he has doubts…… you don’t have to say that everytime he is on screen) and Eidolon (How is this guy in charge of anything?)

Short one this time, but it’s a big one.

Dude invented a planet killer, a really horrible one, what an asshat.

Lucius’s betrayal is about the least surprising thing to happen in the history of fiction.

Then again, almost all of the characters from the 40k setting (Abaddon, Lucius, Kharn) have been portrayed terrible so far.

Ben Cunter is a mediocre storyteller and this is the best book he has written.

The action scenes are passable, but the dialogue and exposition is godawful.

I have to give this book a 4 on my scale though because the subject matter is important for the holistic view of the story. I just wish it was better written.

This book gets a “Must read if reading the series” rating, despite being an average book. The content is too important to skip. 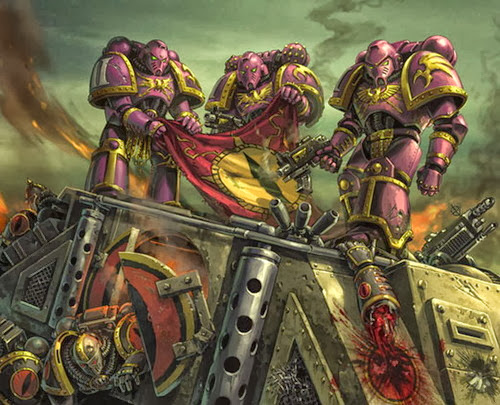 Closing note – Over to the Megapope

And now, how to convince a fellow Space Marine that the Warmaster has turned on the Emperor, by Ben Counter!

(Paraphrased ever so slightly from Galaxy In Flames)

SCENE: The chill void of space above ISSTVAN III. An occasional orbiting SKULL floats past because grimdark. TARVITZ has just been saved from certain death by GARRO who shot down several fighter jets intent on his destruction. He now must convince his battle brother that they have been betrayed.

TARVITZ: So you remember the stories of Terra you told me, right?

GARRO: Indeed, it is hugely old, brother. Like old as balls. But feel free to get to the fucking point about why I just shot down several Imperial fighter jets who were chasing you down. Brother.

TARVITZ: But Terra was well fucked up and the Emperor took that apocalyptic wasteland and he built an empire from the ashes, right?

GARRO: Indeed he did, brother. The glorious shiny Emperor founded the Imperium there and this is why I fight, brother. To stand against the darkness and rediscover ancient glories like soft toilet paper and daytime television. Now about those Imperial fighter jets that I just murdered on your say so…

TARVITZ: Well basically that is what is being betrayed here. That whole thing you said.

TARVITZ: Yes! So what will you do now?

GARRO: Well if I were a sane man I'd verify your massively outlandish statement in some way for starters, but instead I'll just assume that the only person who could possibly be behind this is Horus our beloved Warmaster because frankly he's a petulant highly strung manchild imbued with the powers of a demigod and also any kind of serious investigation would seriously eat into our pagecount. I guess my next step will be going to get Rogal Dorn or Magnus involved who will surely not rip me a new arsehole for presenting them with a laughably insane tale based on pretty much no evidence whatsoever.

TARVITZ: Don't worry, you'll get your own book rights based on the chase scene. I mean I'm sure you'll get away just fine.