I admit to being a little worried about the Horned Rat expansion for Chaos in the Old World.

The core game was so expertly balanced and the four major gods played so differently, in such an interdependent way, that i thought adding a 5th player would through the game off its axis.

The Horned Rat just slipped into the game without creating a stir or causing anyone to think "WELL THATS JUST BS RIGHT THERE!"

I will admit we played with the original set of cards for the other chaos powers and kept the original old world deck for a first play through though.

How do the rats play? Kind of like a mix between Nurgle and Tzeentch. They don't add corruption markers but they do rely on gang tactics (and there are a lot of them). Scoring is done through dominating an area, so if the Skaven want to score and are, they hit it hard and with a lot of dudes.

They also have the charming ability to redeploy quite well. Rats just pop out of burrows wherever they damm well want.

This is the key to the rats play style. Lurk around the edges for a chunk of the game, and then turn up on-masse when a region is about to be corrupted or a throw down is occurring. I rate them as my second my favorite faction to play now..... (after my first love, Slanneesh, NOOKIE FOR THE NOOKIE GOD)

Anyway, my original blog post is here with my thoughts on the core game and a look at the minis

For painting these guys I took a simple approach (I know, you're all stunned and amazed at the concept). The browns are mostly highlights from the darkflesh colour. The bases are chainmail highlighted with some brass effects. Probably the only cool thing on these guys is the bases, which were done with snot green through scorpion green and higher.

Posted by Vomkrieg at 14:15 No comments:

Battlestar Galactica is a great game.

Well… review done, on to talking about the paint jobs!

Oh…wait. So you’re saying a review of a game has to include more than one sentence of approval?

Man, who makes these rules up?

Right… so why is BSG a great game? Well, for me it comes down to a few things. Theme, Production Values, Interactivity and IMCOMPUTREACH! (more on that word later on in the review)

A lot of ideas that are great in one media suck terribly when ported over to another. Just because X was a great PC game, doesn't mean it will be a good film (Doom anyone?) and just because something was a popular comic book doesn't mean the film wont suck (Screw you Stallone).

This is especially true in the Boardgame world. A lot of boardgames based on other successful films, game, books etc suck terribly. There are some exceptions (Game of Thrones, Dune and War of the Ring are great games), but for every one of those classics there are 100 versions of monopoly.

The game captures the theme of battlestar perfectly, not only do the game mechanics represent what happens in the show (Space battles, intrigue, resource struggles) they also capture the emotions as well. You always feel tense and like something horrible is about to happen.

Its fantasy flight games, so you know it’s going to be shiny. Battlestar is a high water mark even for FFG though. The board is great and introduced the “wheel” concept that they have repeated in many games since. The cards are all high quality and have rich flavour text and photos from the series. The cardboard tokens are all high quality and the figures are pretty good. My only gripe with the original game was the cardboard basestars, but they fixed that in the expansions.

A lot of games fall down on the “it’s someone else turn, guess ill just sit here and watch” factor. BSG has very little of this. Someone actual draw cards, move, take an action takes very little time in comparison to the crisis phase which involves all players interacting. Card plat, politicking, accusations and mockery form a solid part of every turn.

Even a players move can be an interactive experience as people will be saying “so….. why did you do that? Are you trying to make us lose YOU CYLON SCUM”. Which brings us to….. 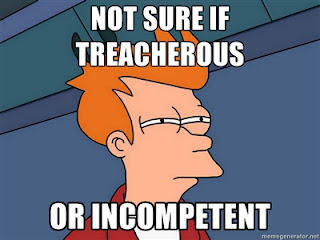 This is what makes the game golden. Because at least one player is actively trying to sabotage the fleet you get paranoid about peoples actions. Sometime, people just make dumb moves in a game. It’s not because they are the Cylon  it’s because they just made a dumb move. This is why we coined the term INCOMPUTREACH!

Definition – An action that seems treacherous but could have simply resulted from incompetence. This action leaves you confused and suspicious at the same time.

This feeling alone can make games a memorable experience. Many a time someone has said “I thought you were the Cylon when you did X” only for it to be revealed that the player just didn't think it through.

I love incomputreach, loves it.

As shown I did two things with this game; paint the models and create flying bases. The paint jobs are very simple with the Cylon ships being given a simple black undercoat and silver highlight (with red eyes). The vipers are white, which is a pain to paint, with a fine red strip (which was repainted multiple times to get it right on some vipers). The Raptors are the old Scorched Brown from the citadel range.

The flying stands are very simple. I drilled a small hole in each spacecraft and glued modelling wire into them. I then got old bolts and filled them with milliput, once they started to dry a little I pushed the modelling wire into the bolt and ensured it did not come out the bottom. I let them dry (some required more superglue later on to ensure they stayed in the base) and then trimmed the bottom of the base with a modelling knife to ensure they were flat.

Posted by Vomkrieg at 21:11 No comments:

Click on the image to see full size (its big!)

200 plus points of Cygnar, all in a row, all painting in the last year.

How does it feel?

7 casters, over a dozen Warjacks and plenty of troop options. I don't really need much more (although I am planning on picking up a few bits and pieces in the new year)

Looking forward to taking some time off painting Warmachine now to focus in on doing some boardgames. 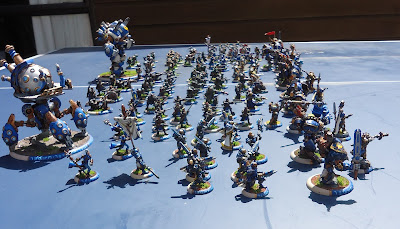 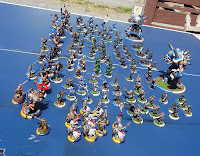 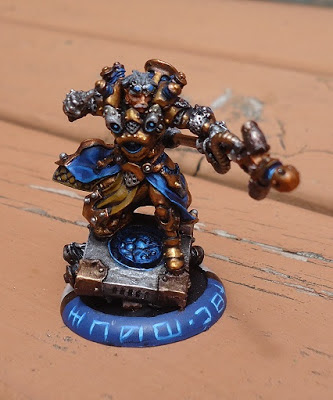 Posted by Vomkrieg at 01:45 No comments:


I've been asked multiple times for the rune scripts I use on my bases. I copied down the Cygnar language a while back, but in a recent thread on the PP forums "coinlord" made this image available.

It's a very handy resource for anyone who wants to convert English into Khador, Cygnar, Menoth, Cryx or Rhulic. I'll keep it here on my blog for anyone who needs it.

Thanks and credit to Coinlord for the image. 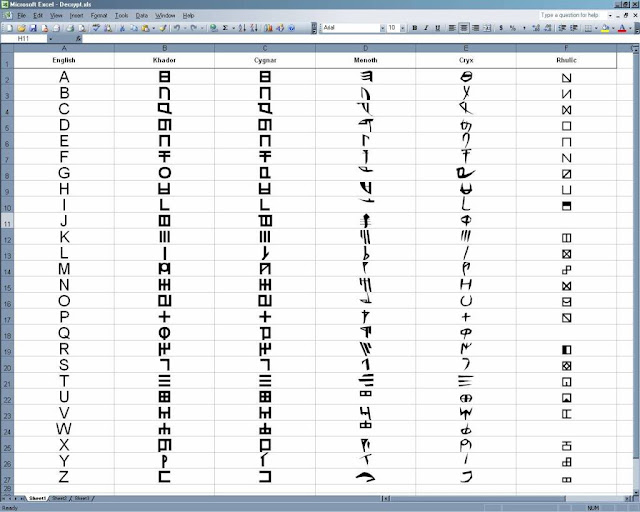 For an additional giggle, translate the following base :) 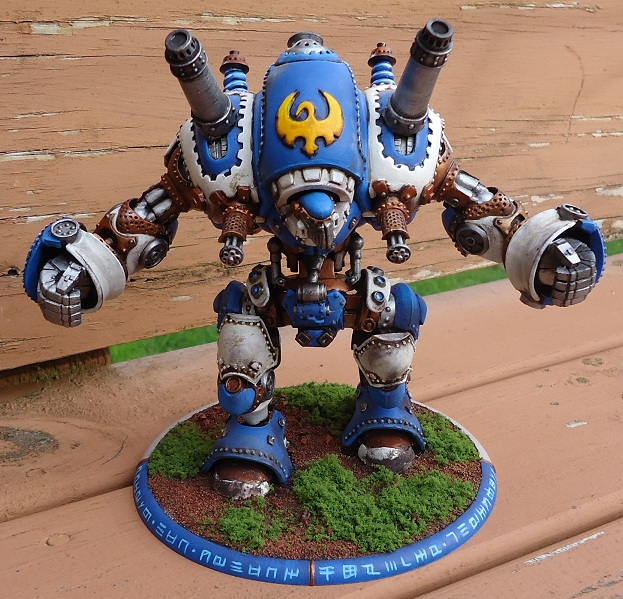