The system is down -update

Life is conspiring against my blogging an gaming right now. Between having to work late most nights for the last fortnight and home maintenance problems i'm pretty hectic right now.

Should be good after this weekend though, Monday the 2nd of July is when a lot of stuff is due. Craziness should subside shortly after.

I've also purchased a brand new PC to replace the old one that was dying. I've resurrected the old one, but in doing so I had to reformat everything and buy new parts and a new OS. I've handed that one on to my partner to replace her 6 year old machine. Cue sounds of Fallout 3 and an angry woman cursing out super mutants.

On the bright side, it looks like "A noobs guide to warmachine" has been added to Battle College, which is awesome. I didn't know that they had a newbie zone before but its in there.

Noobs guide is up to about 6000 direct click throughs and is about 75% of the traffic for the blog, so someone is reading them. To compare, and standard post gets about 30-120 views. The faction section for a Noobs guide is up to 2200 by itself. I'm pretty awed at how well received those posts have been.

So again, more blogging in the future, I haven't abandoned the hobby, i'm just a bit swamped right now.

My computer died a horrible death about two weeks ago.... but like many peoples personal saviour after 3 days there was a resurrection of sorts.

I've had to format the operating system, buy and install windows 7, replace the RAM and reinstall all my applications.

As a result I have been unable to make any decent updates for a while.

On the bright side, my PC was showing signs of failure for a while so I backed up everything. HUZZAH!

Anyway, more blogging in the near future, not so much right now.

Email ThisBlogThis!Share to TwitterShare to FacebookShare to Pinterest
Labels: About the site 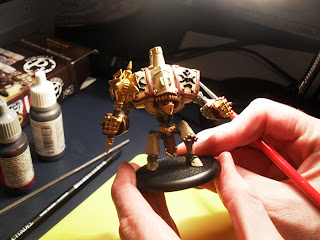 Bright was the day and cold the morning when your hero Megapope strode across the Plains of Sorrow and braved the heights of Mount Anguish... no wait it was actually closer to Johnsonville.

The lads and I decided to make the most of the extra day off work by applying some paint to various warmachine models. Naturally I took a camera along so I could document how the minis progressed and also take some pics of daft friends pulling silly faces.


The first thing this trip taught me was that I seriously need to invest in a decent carry case for all my crap. Vomkrieg has a nice fold out silver trunk thing, small enough to sit on a table, big enough to carry his substantial paint collection, brushes, tools, small House Elf servant, etc.

I brought along this lot, plus a lamp and other useful things. Enough to be annoying and to take a while setting up, when I could have just operated out of a nice fold out casey thing. BUT NO I WAS A MUG.

So who were the intrepid painting team you ask? GEEK SQUAD ASSEMBLE.


The Five Foot Pole appropriately enough plays hard bitten Dwarven mercenaries. He and Vomkrieg spent much of the afternoon playing a game while Millinator and I lurked inside where it was safe, painting.


Vomkrieg has a blog, like a real grownup! Sadly, he has many enemies due to his years as a secret government agent and so opted for anonymity. He plays Cygnar!

As for myself, I managed to get my Manowars base coated and inked up. Here's some progress piccies, as well as a couple pics of how Sorscha is coming along. Nobody took a silly pic of me on the day, sohere's an amusing photo of me at the Warmachine gaming club.


And that was my long weekend of painting. Yaaaaay. One Juggernaut down, six Manowar and a warcaster on the way to completion and some other things waiting in the wings. Next up: playing some more games and getting my ass handed to me a lot. Whoooo!

VomKrieg - Thanks to Megapope for putting this together and heres a link to his blog..... ignore the URL Warmachine fans, its now all Warmachine .... ALL THE TIME! (or until he gets distracted by something shiny.... like a penny or a puddle)


Next thing for out geek squad is to do more painting, get some terrain sorted, press ganger all our other friends into playing (BOTH OF THEM) and set up our own WARMACHINE DOJO! (CULTURAL APPROPRIATION AHOY!)


I'll be back later this week with some more snazzy shots of my Storm Strider, and Epic Caine PEW PEW


But for now, here's another epic Caine

Posted by Vomkrieg at 22:03 No comments:

Just a repost from Duende miniatures....  but as I had no idea this was anywhere near release I found it very interesting. (Also check out his minis, they are awesome and he has a unique style)

Apparently they sold a few of these at lock and load, so the first release for Gargantuans is out months before the books. 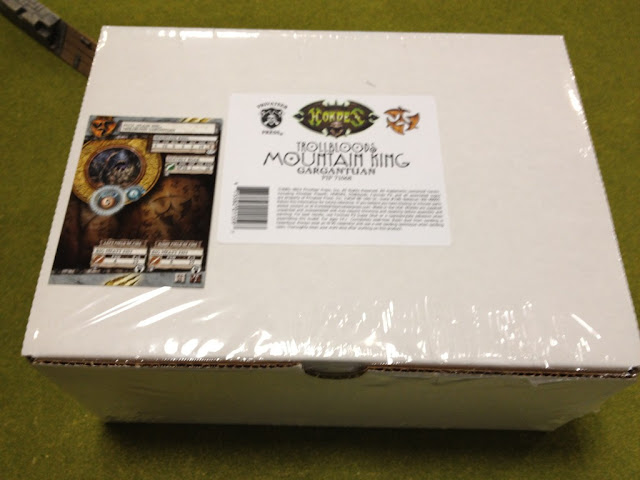 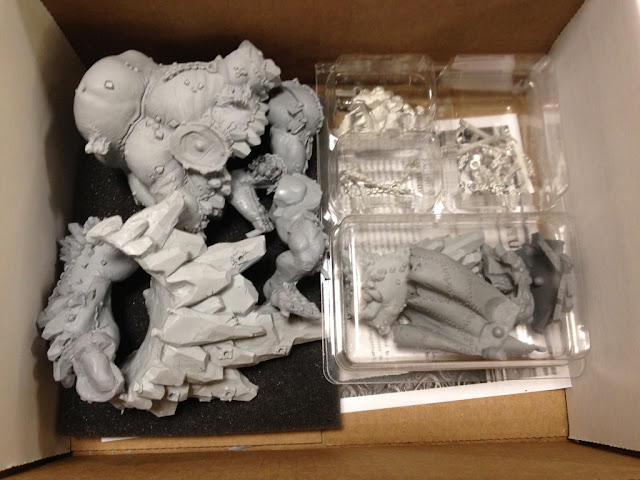 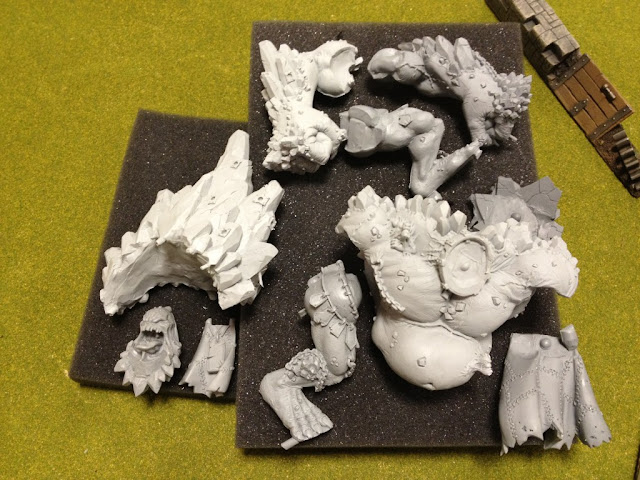 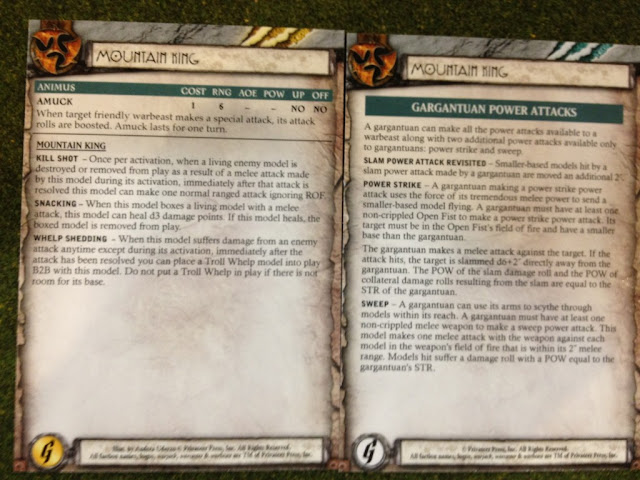 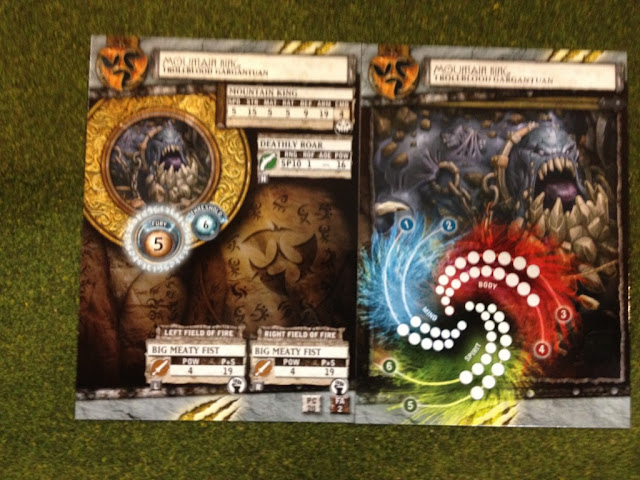 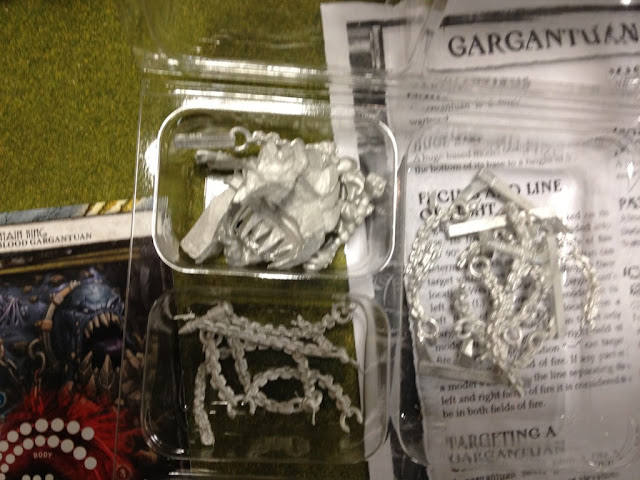 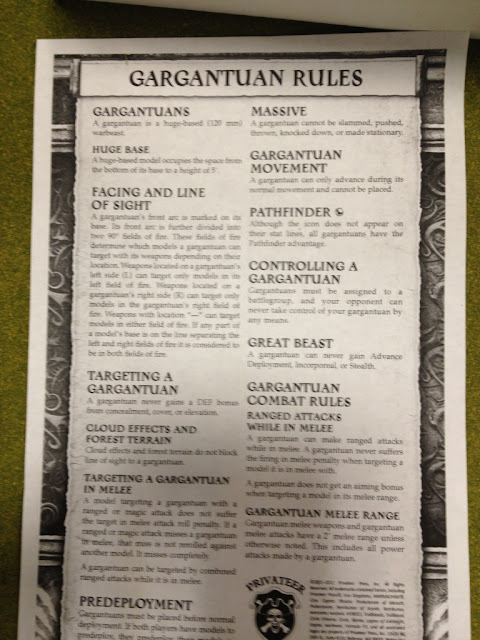 Posted by Vomkrieg at 10:42 No comments: 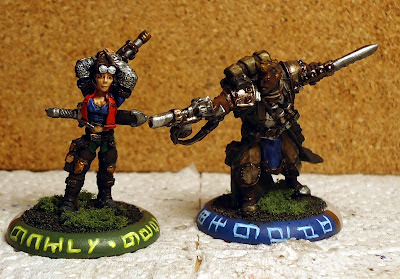 Just a quick recap of what has been over the painting table in the last few months. I've gotten a bit slack on actual painting updates, but here's a catchup.


Sam and the Devil Dogs (With Murdoch)

You are going to have to excuse the quality of the photos, I normally take them outside in natural light but its either been too dark when I've gotten home from work, or raining, or I've forgotten to do so for ages. Therefore the photos are done inside under a lamp..... not so good.

First up, I decided to use an odd palette and mix in as many shades of random metals as I could find. Secondly, I made sure each individual had a slightly different arrangement of colours. Thirdly, I gave same a nice bright jacket and finally I painted murdoch like a trencher.... I also made his skin darker than depicted normally. I can't help but think that the iron kingdoms should have more than two black dudes (Siege and Doc Killingsworth)

One thing on the Devil Dogs is I didn't glue on all the additional axes and guns that came in the pack. It just made them look really cluttered with all that extra kit on them. 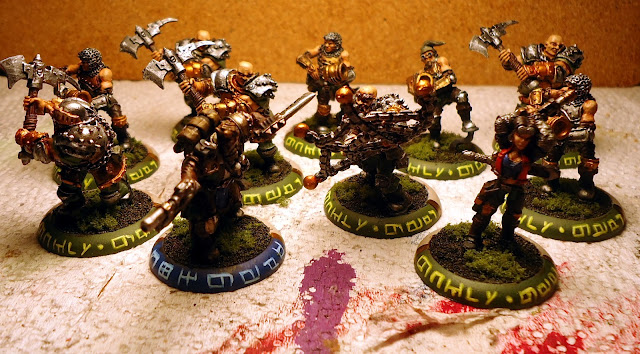 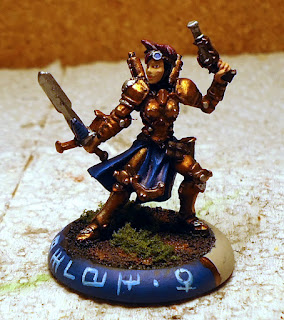 I decided to actually get a journeyman caster, and picked the female one as I don't see her around often.

Followed the same "primary gold" scheme as I did with my other casters. The only slight adjustment was that I started using the new citadel metallics on this model. So far so good.

I finally finished off the Sentinel and the second Omni Jack. The Omni-jack was deliberately painted a higher shade of blue than my other jacks. I figured that if I'm using both Omni-jacks as Defenders or Ironclads it would be a good idea make them easily differentiated on the table.

Also, had some fun experimenting with smoke stacks and ave recently gone back and redone all my old jacks to have this feature. Its easy enough to do. Get some green stuff, roll it into thin tubes and then twirl them together, like a soft-serve ice cream cone. They can look a little rough, after all smoke is pretty chaotic. 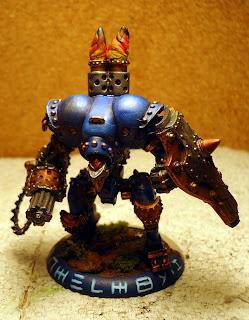 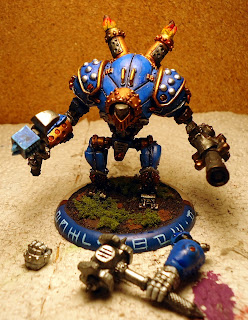 That's all for now, I may try and get some nicer shots later on.... oh.... next up is the storm strider and its looking real good.

Posted by Vomkrieg at 17:04 No comments: