The Gorgon and the Poser - Fulgrim review

Graham McNeill takes the reader to the 31st millennium, when humanity is at the peak of its powers. As the Great Crusade, led by Warmaster Horus, continues to conquer the galaxy, Fulgrim, the god-like Primarch of the Emperor’s Children Space Marine Legion, leads his warriors into battle against a vile alien foe.
From the blood of this campaign the seeds are sown that will lead this proud legion to treachery, taking them down the darkest of paths to corruption. Leading up to the carnage of the Dropsite Massacre on Isstvan V, this is the tale of Fulgrim’s tragic fall from grace.

Surprisingly, this book is about two Primarchs, not one. You can only really view it as the Story of Fulgrim if you think of Ferrus Mannus as purely a plot point in Fulgrims decline.

I say “NO!” Not today. Today the Iron Hands get a fair shake.

But honestly, the book is mostly about the Emperor’s Children and their sharp horrid fall to chaos.

Oh, and Istvaan V. read it for just that really.

He’s one of the three senior officers who get screen time in the book, but this book has the opposite problem to Eisenstein. In Eisenstein you only really got to see Garro’s perspective and everyone else is chaff.

In Fulgrim, every man and his dog has a perspective and it’s hard to figure out who the protagonist is, if there even is one. I did a quick count and no less than 10 characters get a perspective section, it all becomes a bit muddled.

Solomon, the character the best fits the “hero protagonist” from the previous four books is, well, a little bland. He also suffers a completely and utterly ignominious death at the hands of one of the worst shit box characters in the series….. More about that later.

I think though, in the end, this story is about Fulgrim. I know they don’t want to over expose the Primarchs in these books, but this really is his story.

The humans return in this story and their story arc is a pretty freaking tragic one. They focus in on three humans, a gifted but shy sculptor, a painter with low self-esteem and a bitchy prima donna.

This story is not one I want to spoil too much as it’s one of the highlights of the book. The painter in particular is a flawed tragic figure, and her slow but inevitable decline is done in a very graphic and horror provoking way. Props from me to the author for fitting a human story in the middle of a book about super-powered space marines.

As mentioned above, the highlight of the book for me is the sad story of the Sculptor and the Painter. In the middle of a ham-fisted tale of the fall of a Primarch is this sad little tale. To me, this makes the story a lot better than it could have been.

This comic sums it up much better than I ever could. 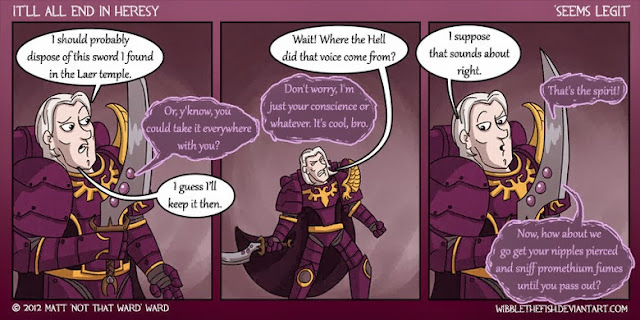 Basically, the evil sword becomes Fulgrims conscience and leads him down a path of ruin….. a ham-fisted totally obvious path to ruin.

There is also a final scene where the sword claims to have fully possessed Fulgrim at the end and he speaks to Horus. It is a seriously painful scene and completely diminishes the weight of Fulgrims decisions and the horror he has at falling.

In short, if corrupting a Primarch is as simple as them picking up a Daemon blade once, why do the powers that be not mail all of the Primarchs one.

Get to know your Legion – The Emperors Children


Five books in and we should really be getting to know the Emperors children quite well. They have had more screen time so far in the series than all Legions bar the Sons of Horus.

So what do we know about them?

First of all, they have a bent about perfection. Some might say that’s setting yourself up for failure….. and well that’s what this book is really about. They strive for perfection and that pretty much means they are destined for a life of feeling really shitty about themselves.

Think about it. How self-defeating is perfection as a goal. Consequently, the legion falls into two archetypes. The first are the serious professionals who learn from their mistakes and aim to be better and better, seeing perfecting as an ideal, but an unattainable one.

THESE ARE THE GOOD GUYS!

The second are arrogant condescending twats who think they are perfect and tell everyone this. They also lie about how awesome they are to cover up that they are not perfect.

THESE ARE THE BAD GUYS!

Now that is clearer up we can talk about a few high-points and low-points of the legion.

On the good side, they know how to fight in a coordinated and disciplined fashion. I actually find the idea of coordinated strikes and layered fields of fire reassuring, especially compared to the Abaddon school of military thinking….. that bein UGH ABADDON SMASH!

It makes them come across as a smart group of soldiers and not just a bunch of deformed meat axes who beat everyone because….. AWESOME!

I also like that the bent on perfection drives the use of combat drugs and augmentations. I do kind of wish this started before the possession though.

The downside…. And it’s a big one….. is that this book shows the origins of the freaking noise marines.

They were never cool, they were a freaking joke, so why are they still in canon after all these years?

Get to know your Legion – The Iron Hands

The Iron Hands get less of a look, but it’s still nice to see some mention of them, even if it’s mostly done to contrast the Emperors Children.

First of all, they don’t bother painting stuff or doing much decoration, which gives them a nice rustic “I MADE THIS WITH MY HAMMER” ascetic.

The links to the Mechanicum are clearly demonstrated in the book with references to Forge Fathers and the fact Fulgrim tries to lure Manus over to Horus by mentioning the defection of the Mechanicum.

A good bit is mentioned about the Iron Hands love for bionics, right down to a senior officer getting cut in half in one scene, only to return as a cyborg later on.

Mostly though, they fight and die like baddasses, stubborn stupid baddasses.

Get to know your Primarch – Fulgrim, girly man of all girlydom.

Fulgrim is meant to be a tragic figure, one who strives for lofty goals and falls hard.

Unfortunately this book starts too late for us to see what the real Fulgrim was like. I mean, even before he finds THE EVIL SWORD OF EVIL, he’s a bit of a douche. I do wish that more of his pre-possesion personality was shown, as the conflict he fights in his internal monologues is pretty one sided.

I also think that Fulgrim, the Emperors Children and Slanneesh in general get dissed by a fair few people out there. Is it the pink armour? Is it the fact they worship a pleasure god? Or is it just the male wargamer tendency to recoil in horror at anything that isn’t super macho?

Fulgrim gets the full “feminisation” treatment in this book. He likes art, he does painting, he listens to music….. no wonder he falls to chaos because he’s soft.

Khorne sells far more than Slaneesh, the only conclusion one can draw is the red/black manly kill psychos appeal far more than pink hedonists to the average adolescent wargaming mind.

PS. I imagine if Japan did 40k, then Fulgrim would be insanely popular. Just check out this fan art.

Get to know your Primarch – Manfriend von Manstein….. the manly mans Ferrus Manus

Ferrus Manus on the other hand (LOL!) is the perfect macho man ideal. He’s covered in scars, doesn’t like art, and HAS METAL HANDS!

He couldn’t be more masculine if you tried really, and of course he is the good guy in the story. To recap, Feminine = bad, Masculine = good.

Anyway, I like the portrayal of Ferrus. They made him gruff and sombre without making him a wall of granite. He teases Fulgrim like a brother and takes a few jibes with good humour. I was worried they would make him yet another “rigid and inflexible” martinet of a Primarch (Dorn….. anyone?).

I also like that he gets really angry, and that his anger, combined with his fondness for his brother is his undoing.

PS. I love that he’s dead. Like proper dead. No coming back dead. Not enough characters in this setting stay dead.

Fulgrim “But father, why did my legion suffer so early in their existence, what happened?
Emperor… “Um…. Stuff…. Don’t worry about it”
Fulgrim “Ok…. Well…. I guess we won’t have any more errors, I will strive to be perfect”
Emperor “good luck with that *snicker*”
Fulgrim “What? Um? OH GOD WHAT IS WRONG WITH ME??????!?!?!?!?!”

He still sucks as a character. But the final scene he has with Solomon Demeter is hilarious, as are his antics when he rejoins the legion. This guy really can’t be a chaos worshipper, he’s too being worshipping himself.

I’ve said it before and I’ll say it again but Graham McNeill is the journeyman of the writing team. You have your star players, your rookies, and your busts, but McNeill is simply solid.

Like his first book in the series (False Gods) the book is solid.

Some of the characters are paper thin, but this is made up by the human characters and the epic developments.

This book must be read, if only to see the Istvaan V massacre unfold.