Warmachine vs Hordes - A NOOBs guide to Warmachine..... and Hordes.


I hear you ask "So why is it Warmachine and Hordes.... is it two separate games... how can they can be played together if they ain't they the same game.... and if they can play together how on earth is it balanced.... surely one side is better"

Well my slackjawed hayseed readers, I can safely say this....

There! I said it!

Well, asides from the glaringly obvious differences between Warmachine and Hordes (Being steam-powered Warjacks vs Massive Meaty Warbeasts) there is a fair bit different going on mechanically in the game.

All this advice is generic by the way, for every example their is a caster/lock/beast/jack that seems to break it.... I'm talking broad themes here.

So lets break it down


95% of the rules are the same. How the turn is structured, how units move, cover and LOS, dice rolls, unit stats, pretty much the entire core system is identical

Each force is structured around a hero character and their battlegroup, and battlegroups work much the same way. The differences, while important, are far smaller than the commonalities. If you only play Warmachine factions, you will need to learn a few new tricks and rules when playing hordes.... and the reverse is true.


So what defines each system?

First up, your hero characters are warcasters and they have a focus stat.

You get the same amount of focus each turn on your warcaster and can use this to power spells and warjacks. Most Casters have 6-7 Focus but it ranges from 5-10. 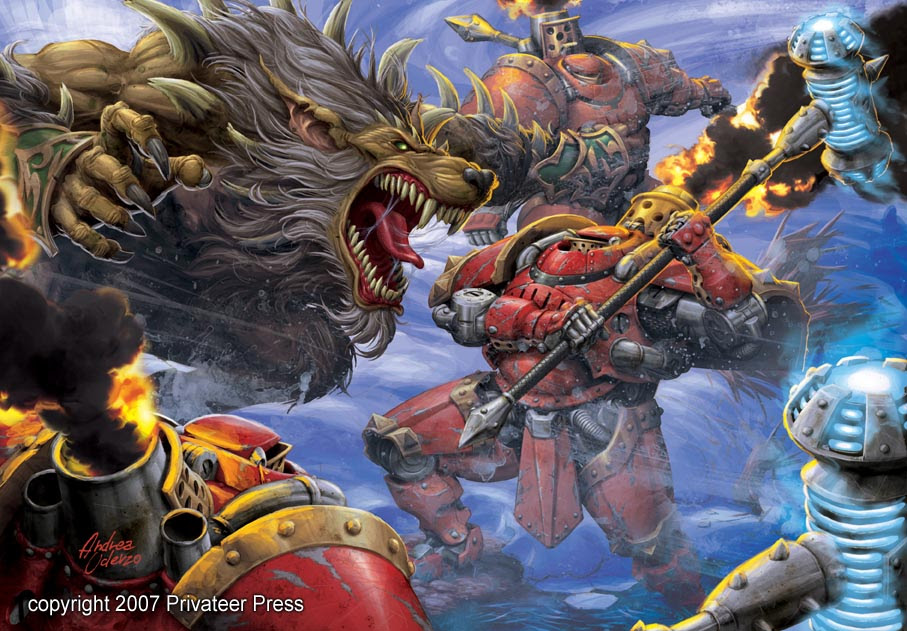 At the start of your turn you allocate focus to your warjacks. This can be from 0-3 in most cases. Any focus left over you keep for you caster so they can cast spells, boost rolls, buy additional attacks and overcharge their power field (more on that later).

This means you should plan at the start of your turn what warjacks need what focus and what spells you will cast.

This finite pool that replenishes every turn has given rise to a perception that Warcasters get better as their warjacks die. This is not entirely false as it means they are giving out less focus and using it on themselves. Many casters are wrecking machines in the own right and barely need warjack support, focus spent on a jack may be more useful in their hands. Epic Caine, the gunmage is a good example of this.

Also, in general Warcasters tend to be more individually powerful than warlocks, both in feats/spells and weapons. This seems to be balanced out by Fury vs Focus.... see next section.

Left over Focus points are used to increased your Warcasters armour. In some situations you may keep back some or all of your focus points to make your caster harder to kill. Even the least armoured warcasters can get the same level of armour as a Khador Heavy jack by fully overboosting their field. Combine this with other spells and effects and your caster can be one tough cookie.

So if you think your caster may get shot at a lot one turn, consider holding back some points.

Warjacks are reliable, if a bit crap without focus. They need focus to run, charge, make additional attacks and boost rolls. Some also need focus for their own bonus special effects. In general Warjacks are better armoured, cheaper and have better guns than warbeasts, they also tend to carry higher strength melee weapons.

All these good toys are less useful without the focus to power them.


So what happens is people tend to have only a few jacks bound to their caster, 2-3 seems a popular amount. Any other jacks are farmed out to "jack marshals" who run the warjack themselves and give it some limited bonuses. This allows you to use the warjacks you have effectively without wasting focus points you may need for spells or survival. 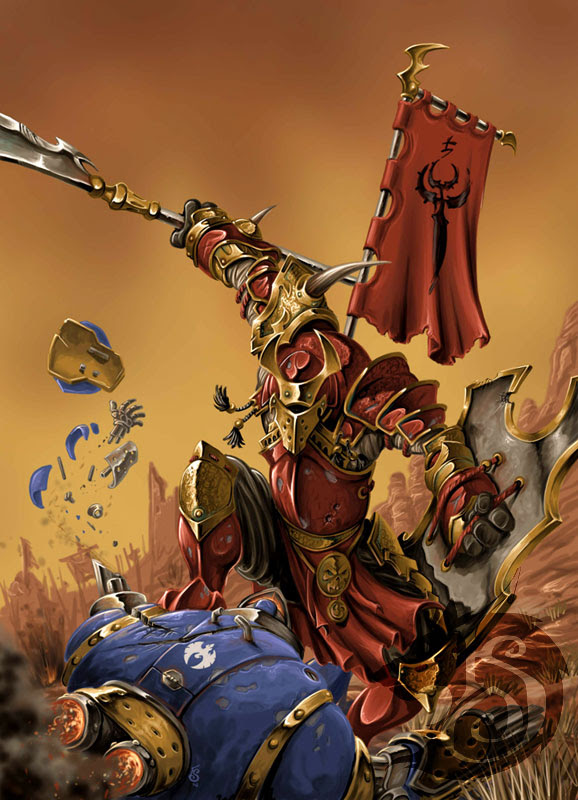 Warbeasts are mostly armed with natural weapons and tend to have more base attacks than Warjacks. Warbeasts have a higher operating tempo than Warjacks and can reliable do more in a turn.


Each Warbeast has a fury stat, between 3-5.

Warbeasts generate Fury when they are forced to do something. While within their Warlocks control area they can charge, run, boost rolls, use their animus (see later) , heal, and make additional attacks. Also, a Warlock can just rile a Warbeast to put Fury on it, even if the beast isn't doing anything but picking tis nose... it can pick that nose REALLY ANGRILY.

Where Warjacks spend the focus allocated to them, Warbeasts build up Fury that must be transferred off them at the start of the next turn.

If managed well the beast can use all its Fury each turn, if not their is a chance the beast will frenzy at the start of your turn and attack the nearest enemy (or failing that, your own people). Their are units that can manage Fury for you as well, like the Legion Forsaken and the Skorne Beast handlers.

Each Warbeast also has an animus, which is a spell it can cast. This spell is also added to it's warlocks spell list as long as the Warbeast is in it's battlegroup.

Warlocks have a fury stat, and this amount is the maximum Fury points the can hold.  A warlock gets fury each turn by pulling it off their Warbeasts. During their turn the warlock can spend these fury points to cast spells, make additional attacks, boost rolls and transfer damage (see later). The average warlock has 6-7 Fury.

So, here's where Fury has an edge over Focus. Your Warbeasts generate Fury from their actions and you spend it on spells, this essentially gives you double the amount of spell casting and actions than the equivalent Focus Warcaster. 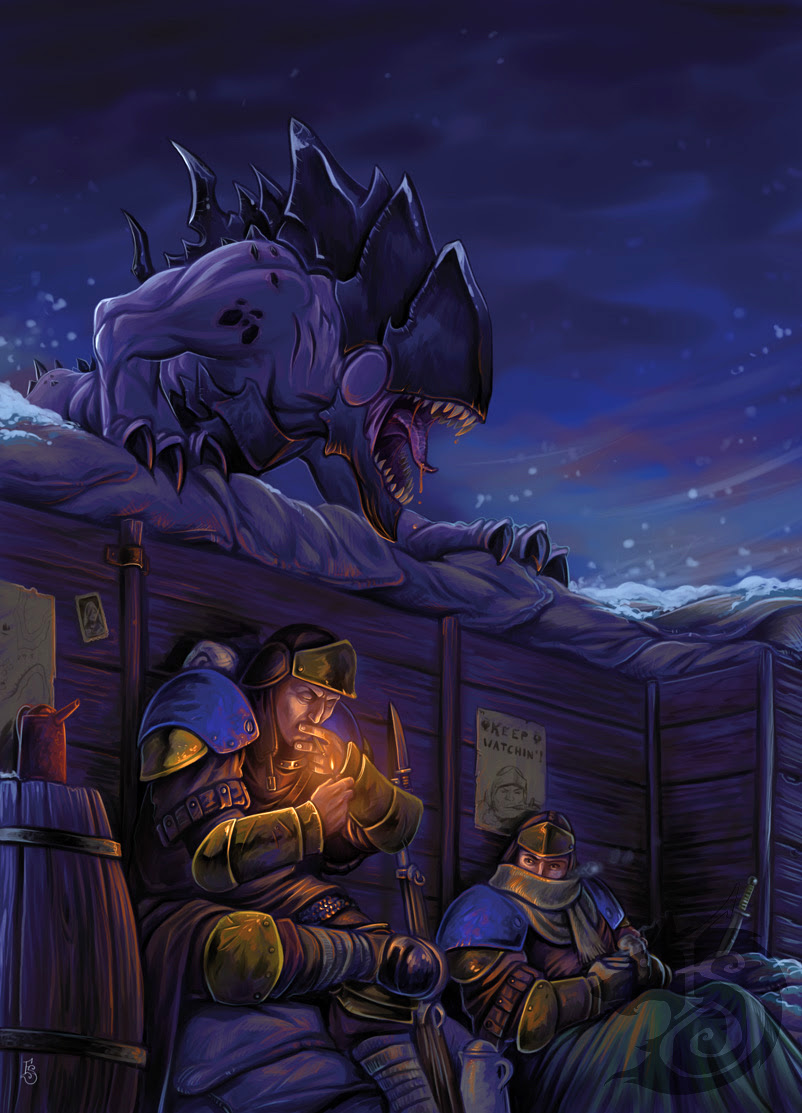 This is counter balanced by three factors

1.) Warlocks have in general weaker spells and effects
2.) Warbeasts cannot be forced outside your control area (a Warjack can be allocated focus and then move out of your control area to use it)
3.) You cannot generate Fury from a beast after it has died.(although you can at the moment of death)

Focus never drops off and a lone Warcaster is still a threat. A warlock with no Warbeasts to generate fury is not long for this world (They can "cut themselves" for Fury, but that's not going to last them for too long)

Instead of overboosting their power fields, Warlocks can spend one fury to transfer a wound to one of their Warbeasts. This Warbeast must be in control range, not be on full fury, and have enough health boxes to take the wound.

It's very difficult to assassinate a Warlock with healthy Warbeasts and a lot of Fury.

Well, if the ascetic differences between Warmachine and Hordes don't decide for you, then the mechanical differences should.

Focus is reliable, requires planning and Warcasters can be one man armies of havok and doom.

Warlocks are more about synergy and being one with their Warbeasts.

Make the choice that's right for you.

PS. I also think the Warmachine infantry is a little better than the hordes equivalent.... but cannot really back that statement up much.

All this art stolen from this thread on the Privateer Press forums.  Full credit to all the original artists

A quick guide with some advice on how to put together an army list, and some of the common pitfalls new players fall into.