Painting War of the Ring - Part 2

Well, I started off showing you the bad guys armies, so it makes logical sense for me to show you the good guys next..... well duh?

Anyway, 5 factions, and the fellowship make up the free peoples faction for War of the Ring. A curious thing about the game is how you don't have to play "by the book"

What I mean by this is that you don't have to start in Rohan by attacking with Isengard and then follow up with Mordor attacking Gondor. The key battles in War of the Ring can happen all over the board, and whil it is logical to go for Gondor with all of Saurons might. Sometimes its better to head north to smash the dwarfs, or sack Rivendell.

The different strategies that can work are what makes this game a great one for me. My fondest victory ever came when I by passed Gondor and Marched an Easterling army through Rohan and into the Shire.

Lets start with the biggest and baddest faction of good guys, Gondor. The models are mediocre sculpts again and the spears suffer from being low quality soft plastic.... so they get a bit of the droopskis. I used the movies colour scheme as a base for these guys and really like the simple black/white/steel look. 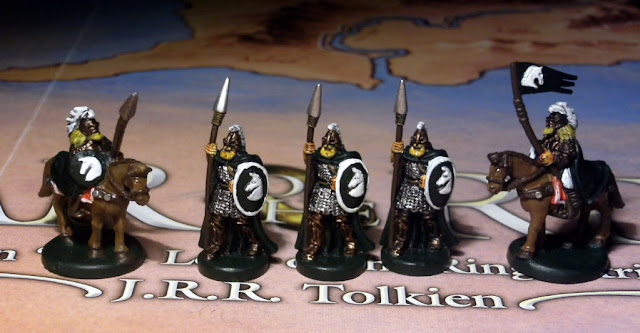 Rohan was also based on the movies look and feel. I think these guys turned out alright. The infantry sculpts have better detail than Gondor and the colour palette was nice and simple. The blond beards help these guys stand out nicely on the table, as do the white horses on the shields.

Tra-la-la its the Elves.I tried making these guys stand out from the Rohan units despite both having a predominately green and white palette. The elven infantry sculpts are pretty awful and suffer from "the leans" as you can see from the soldier on the left. Still, I thought the white charger look for the commanders was a nice touch, makes them look all regal and stuff.

THE NORTH! You remember these guys from the films right? right? Well, you do see some of them in a pub in Bree getting murdered by nazgul.... and Strider is technically a ranger from the north. The North represents the other human nations asides from Gondor and Rohan. So that's the Beorlings, men of Arnor, Carrock, the Dale etc.

More droopskis here but I do like the infantry sculpts. Beardy men with bows does capture the essence of the north, as does rangers on horseback.

I do lament that the Dwarves are a comparatively minor race in the game. It's their location one half of the Dwarven forces are in the far left of the map where they can't really get stuck in very easily. They also have less troops and fewer recruiting cards. That being said the Dwarves near the lonely mountain in the east have saved the day for the free peoples numerous times when I have played.

As far as the models go, I love these guys. Very stocky and I really like the leaders and Elites. 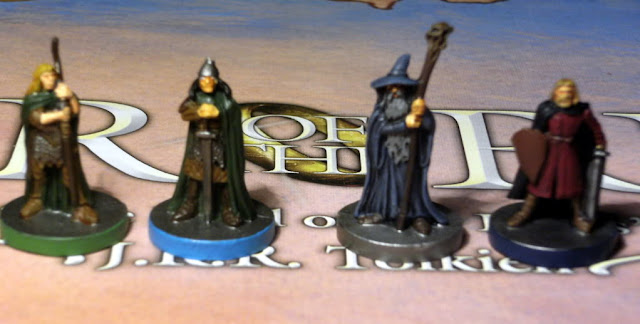 Sorry, not the best photo. On to the fellowship! Legolas - Painted elven styles! Aragorn.... well the model is kinda meh, so I painted him up like a ranger. Boromir is a far nicer figure and I used the red palette inspired by the films.

Gandlaf however is great. A nice cloak with some good detail, I actually bothered to highlight this guy and it shows!

I think Gimli is pretty cool, but would liked to have seen him standing on a  rock like the Dwarf leadership. Merry and Pippin I painted using the Gondor and Rohan schemes.... they look quite good considering how tiny they are. Sam and Frodo look very cool and the gold trim helps you locate the fellowship easily on the table.

And for bonus points I got a limited edition Gollum figure thanks to a friend of mine. Doctor Doctorman, you know who you are.

Well that's almost it.... for now. I have battles of the third ages (even though its a terrible cost seeing I dont like the minigames). At some point I will finish off the bonus materials (Balrog! etc) from that box and post them up here.