Angry angry elves - how to lose at Warmachine 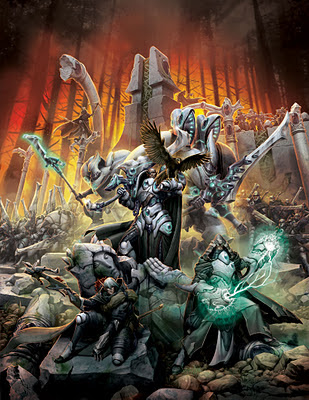 Well, this week I took on Che and his retribution force. The big thing to note is I’ve enrolled to play at valleycon, which will be my first gaming tournament of any kind. I am fully expecting to get my butt handed to me by a selection of highly skilled players.
I don’t expect to win this tournament….. and by win, I mean win a single game across two days. I firmly believe I will take home the wooden spoon and be crowned Valleycon swamp gobber (There is a prize for being the crappest person there)
The tournament has some special rules, all games will be 40 points and people need to play armies that are themed lists. This will limit my options a lot, as I really only have the forces for one themed list at the moment. I do need to buy some more dudes to fill out my army so I have the option of fielding a second list.

So, who is my opponent this week

Well it’s the Retribution of Scyrah. Yeah…. That doesn’t really tell you much unless you know the back story of this faction. Elves in this setting are xenophobic maniacs…. And I quite like that. Their gods are dying or dead and they have figured out that human magic started about the time their gods started dropping off. The last god alive in their homeland (although paralysed) is Scyrah. So the Retribution of Scyrah is a bunch of homicidal mage hunting elves….
GOOD STUFF!
These guys have the classic elven ennui and declining numbers, but they aren’t going on boats to the west. Hell no, they are planning on murdering mages and their children while they sleep.
This force was commanded by Che, who is a heck of a nice guy. Both of us were a little sketchy on some of the rules but luckily Chris the press ganger and Jimmy (Of Morghoul kicking my ass some months back fame) were playing at the next table.
Che also told me he came last in the tournament he went to, so I felt like this was a preliminary battle of the wooden spoon.

Well, my options are limited due to having to use a tiered list. So I went for Siege – The Big Guns. Loads of trenchers and an entire army that can advance deploy. This army can pretty much all dig in or hide with stealth, its not going to get shot up much. Its melee punch is limited though
Siege
Two Defenders
Trencher Commandos with scatterguns
Trencher Infantry with Grenadier, Sniper and officer 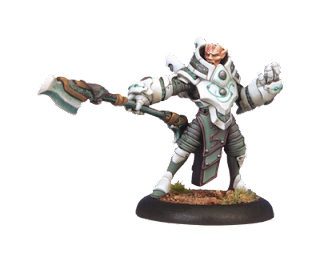 We got Chris to give us one of the new scenarios, and it boiled down to controlling two areas in the middle of the table.
I deployed first, by placing my caster and his two warjacks and then told Che to deploy his army. The cool thing about an army that almost all advance deploys is that you can normally see everything your opponent has set up first. Which was really handy. I ensured my commandos were on the same side as his toughest infantry as “anatomical precision” is great against hard targets.
Ches force was commanded by Adeptis Rahn who is a good spellcaster with lots of annoying tricks up his sleeve. First of all was polarity field, which would stop me charging a unit…. This damm thing popped up all through the game and was a real hassle. Ches force had some dawnguard heavy infantry, combat mages, some funky solos, Archers who launch grenades, a light warjack and a magical floating time displacing cannon the size of a building.
Yeah…. You read that right….. a magical floating time displacing cannon the size of a building. 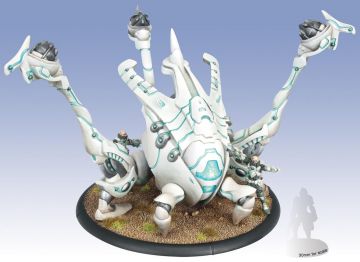 Thankfully, that cannon wasn’t as dangerous as it could have been due to my guys digging in to avoid the blast damage from its massive long ranged firepower.
The battle really started in my favour, and after 2-3 turns Che thought we may have time for a second game. My commando unit had messed up his dawnguard with scatterguns and their sharp stabby knives. My defenders had turned his light warjack with an arc node into a smoking crater and the turn after they did that to the magical floating time displacing cannon the size of a building.
Finn died after counter attacking the dawnguard and some commados were dead, but mostly I was looking good.
Che’s ranged firepower was having little effect on my dug in guys and with half his army broken I moved in for the kill and popped sieges feat.
I then promptly missed with just about every single attack and left siege uncovered and in the open. 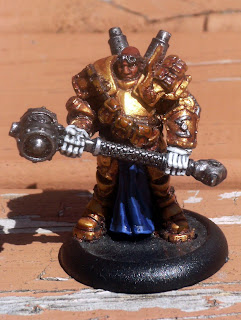 It’s worth noting that the their was a direct correlation between the death of Maxwell Finn and the subsequent inability of my soldiers to shoot straight (+2 to hit for all trenchers who can see him is a great buff). It’s that and Che put his guys in cover. At one point I missed an 7 person combined range attack …. Defence 20 is just so damm hard to hit.
Che counter attacked pretty hard and a pair of solos managed to knock siege down to six health. He pulled back after one of the defenders decided to play hammer time with the solos, but on Ches next turn he rushed his caster forward to launch lightning bolts at Siege.
All the time this was going on in the centre of the battlefield, my trenchers and his mages/archers were involved in a struggle over a bridge. Two shooting forces with high defences, it was a real attrition battle.
Finally, Che was just out of range and had to damage siege with splash damage from his spells. He just couldn’t quite crack sieges armour and at the end of the game siege had 6 health left.
Che shook my hand and my defender rolled up to Rahn and smashed him in the face.
What had looked like it was going to be a quick game in my favour had quickly become a fight to the death and a close fought thing.
So I won for the second time, but really I should have won this safely a lot earlier. I gave Che an opening and he responded well, if I hadn’t of saved 2 focus on siege during that one turn siege would have been dead.
Lessons learned 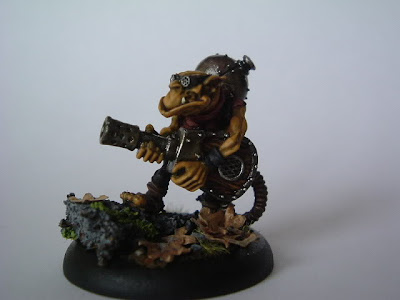 Email ThisBlogThis!Share to TwitterShare to FacebookShare to Pinterest
Labels: Cygnar, How to lose at warmachine, Tactics