Empire of the Rising Sun - Axis and Allies Anniversary edition

As our epic journey continues into my set of Axis and Allies anniversary edition its time to look at the pacific powerhouse, the axis power that shoots first and asks questions later, the big bad unstoppable HULK SMASH armada that is the nation of Imperial Japan.

Japan was a so-so power in the original Axis and Allies, but in anniversary edition it is seriously dangerous. Left to it's own devices Japan can become a rolling juggernaut that can conquer everyone. If the Allies concentrate 100% on Germany and the Germans can hold out, Japan can become a complete monster.

So, technical issues and such. Here are the signature paints used in this set

The aircraft bases are something I haven't mentioned before and they really add a little bit to the presentation of the game (And they look awesome on the carrier planes).

The process for making them isn't too complicated either.

1.) Get a drill bit and some thin wire (And clippers). You also need some washers and some modeling clay like Milliput. All of this can be obtained at a friendly local gaming store or hardware store.
2.) Make a very small drill hole in the bottom of the planes.... very shallow, you don't want to drill through.
3.) Use the clippers to cut the wire into roughly inch long lengths. I'd suggest making the bombers wire a little bit longer so they look more impressive (Like they are flying at a higher altitude)
4.) Glue the wire into the planes with superglue and wait to dry 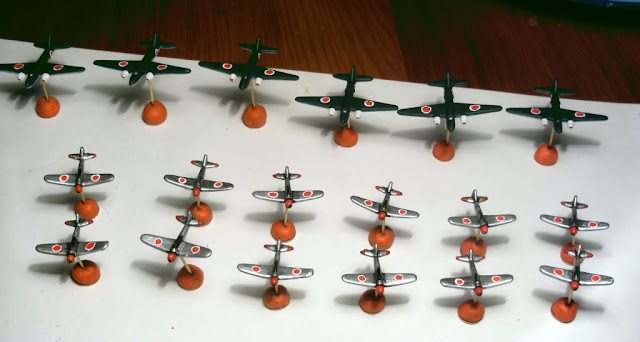 5.) Grab a washer and the milliput, ball the milliput onto the washer and mould it into a ball shape. Leave it for a short while to harden slightly then drive the wire into the ball so that it almost comes out the bottom through the washer.
6.) Wait for AGES AND AGES for the milliput to harden. Use a knife and trim the excess miliput off the bottom of the washer so that it sits flat on the ground
7.) Paint in faction colours
8.) Attack Pearl Harbour
9.) VICTORY!

Also, to close out here are the capital ships of the all powerful Imperial navy. I'll talk about flags on ships next time, but DON'T THEY JUST LOOK BOTH COOL AND CUTE! 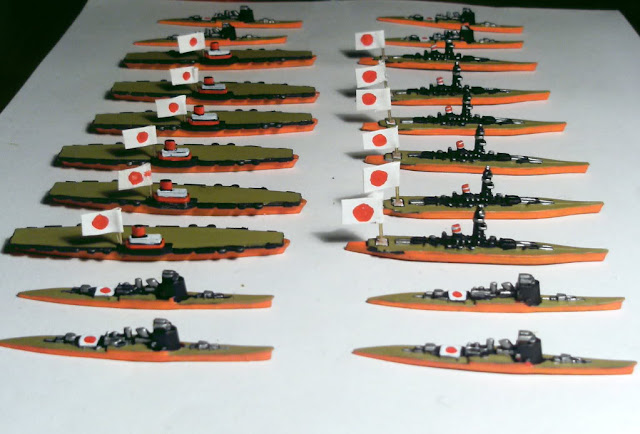