In Soviet Russia Axis and Allies Paints You

Continuing the exploration of my Axis and Allies set we come to the Soviet Union. When painting these guys a few people said "Its such a big box of models, why are you painting the Russian Fleet so early, i very rarely gets used".

The simple answer is I'm pedantic and process obsessed. If I say "I will paint this in order, I will"..... even if it makes little logical sense.

I'm weird like that, feel free to judge me! 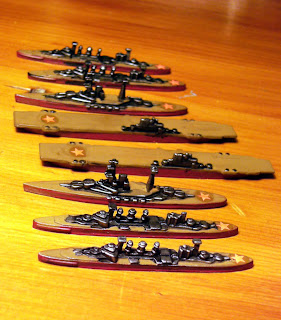 Anyways, I'm really proud of how the Infantry and Armour ended up looking. I picked up a transfer sheet from flames of war along with a paint set. So the Russian Stars are pretty high quality as are the little Russian slogans on the tanks.

Noteworthy colours used in this set are 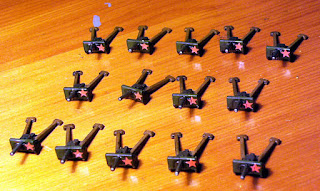 I didn't start adding the fleet flags until the Japanese but really, thats fair. Both Germany and the Soviets tend to be light on fleet during the game, especially at the start. So the Soviet fleet just ends up with transfers, which looks good in my book.

There as a deliberate decision not to paint the ships too realistically. No warship I've seen has a bright red hull as that would be pretty foolish. The decision to paint them like this was to make it very very clear what faction controlled what piece at an easy glance. If all ships had gray hulls it would be a bit of a pain to play.

That being said I may have overdone it for the Soviet submarines as they look a bit silly being completely red like that. 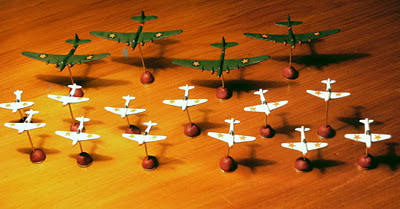 If your looking at doing a World War II army of any type I suggest looking at the Flames of War Site. Also, this PDF is amazing for selecting the appropriate colours to be historically accurate.

If I have one small regret it's not basing the Russian soldiers with snow.