Flight of the Eisenstein - Review 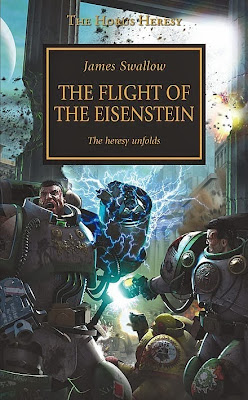 Having witnessed the terrible massacre of Imperial forces on Isstvan III, Death Guard Captain Garro seizes a ship and sets a course for Terra to warn the Emperor of Horus’s treachery. But when the fleeing Eisenstein is damaged by enemy fire, it becomes stranded in the warp – the realm of the Dark Powers. Can Garro and his men survive the depredations of Chaos and get his warning to the Emperor before Horus’s plans reach fruition?

That’s pretty much it, this is one dudes personal story but I don’t really have many issues with that.

In a way it’s the story of the apostle Peter. He spends the book denying Jesus Keeler and not accepting the Emperor into his heart. Once he does however, you can tell he’s gonna be the guy who builds up the faith of the Emperor in the Astartes, the rock on which the church would be built.

Asides from that the book provides some background fluff on the Death Guard, which I was very appreciative of, as well as the escape of the Eisenstein (a frigate) from the blockade surrounding Istvaan III.

It also deals with the inevitable fall of the death guard to Nurgle.

Seriously, if he was anymore square jawed and honour bound to his duty he would be a caricature. I mentioned this is review one, and I’ll keep reiterating it. The Hero-Protagonists in the first few books are exceedingly interchangeable. The big difference is the legion they belong to.

That said, the thing that sets Garro apart from the other two is the question of faith. The author does a pretty good job of slowly introducing miraculous stuff that makes Garro question the secular world he has been fighting to create. Did he really hear the Emperor in his coma, or was it just his servant muttering to him? Does that even matter?

The miracles are small and revolve around Keeler, who we already know can melt demons with her brain. What I like is the gradual acceptance of conversion and the continued denials of it. To change ones core beliefs shouldn't be an easy thing and I think Swallow conveys that nicely.

Also, his final epiphany on the moon, framed from behind by Terra in the sky, was pretty cinematic.

Keeler as a character is now a plot device and it’s a bit sad that her story in this book is told almost entirely from Garro’s perspective. Even Sinderman and Mersadie are relatively drab in the story. I feel this group was underutilized in this story, but it is understandable as the story is about one dude, Garro.

One cool things introduced in this book are the “Sisters of silence”, a group of female psyker hunters. They are sort of an amalgam of the sisters of battle and the culexus assassins, a group of women sworn to silence (like nuns) who can cancel out psyker powers. I quite like the concept and I thought they introduced them well and portrayed them as very competent warriors in their own right, not a match 1 on 1 with a Marine, but expert in their own field of witch hunting.

A failing of the book is the lack of development of the other characters.

Temeter is introduced as Garro’s friend and ally Captain in the Death Guard. It’s his lads that get virus bombed in the trenches outside coral city. I was expecting him to survive and a story be told about how the Death Guard fought for every inch of ground…… but no. He bites it in the first salvo.

Same holds true for most of the rest of Garro’s command squad. Decius, a young warrior full of bravado has a few great scenes I’ll talk about later, but that’s less about the character and more about what is happening to him. Voyen, the apothecary has an arc, but it’s a bit of a predictable one and his resolution scene is a bit naff. To sum it up, he becomes a hippy.

But, most disappointing of all is how Kaleb, Garro’s human butler/housemaid has this really cool orign story and a good bit of development early on. Unfortunately he doesn't survive the second act and his death is basically a learning exercise for Garro. 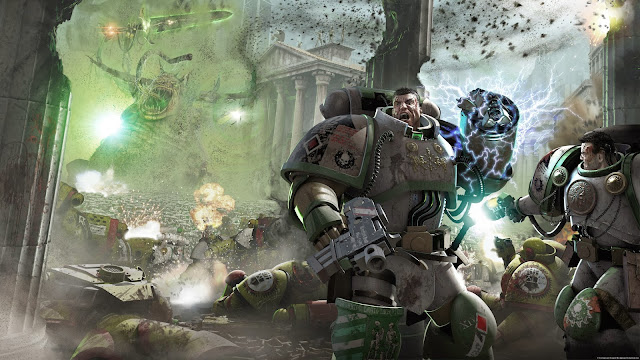 You can tell Grulgor is a baddy because

Yep, hes basically a terrible caricature, he might as well have worn a shirt saying “HATE ME NOW PLEASE”
Typhon isn't much better…..

Get to know your Legion – The Death Guard

I have a soft spot for all things Nurgle. He’s my second favourite chaos god and I’ve always liked the idea of the death guard in 40k. They aren’t flashy, they don’t have loads of tricks, but they are tough sons of bitches who win battles using solid infantry based tactics.

The portrayal of the Death Guard is actually pretty cool in the books, especially as they choose to contrast them with the Imperial fists later in the book.

Grim, curmudgeonly, gallows humour, toughness, these are traits to describe the Death Guard. I particularly like how they differentiate them from the Imperial Fist, another legendarily dour group by showing that Death Guard are more outspoken and less beholden to hierarchy. They seem to have an attitude that if your tough enough to be Death Guard, then you can speak your mind when you need to.

Kaleb’s story about failing to initiate is well told. Basically, to be Death Guard you have to complete a super marathon, in poison gas, running across barbed wire while having people blow their noses on you. Only the toughest, orneriest bastards make it out the other end.

Get to know your Primarch – Mortarion

Ok, ok….. so this dude is giant and gaunt, carries a scythe and sniffs his own farts.

There is basically a scene where he does that………… ANYWAY

I think the Author missed a trick here by not letting us see more of Mortarion than this. He gets a few scenes at the start of the book, but it’s pretty shallow stuff. He’s immune to poison, so he likes to drink it for fun with his friends, he’s a badass warrior and he’s scary. 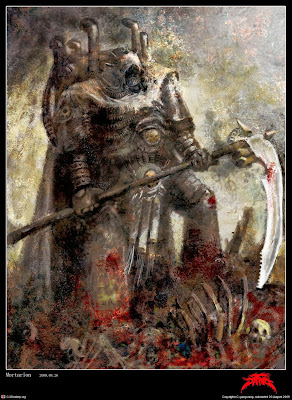 None of that is deep or particularly interesting. However, there are two things I did note about Mortarion from the text that I found fascinating.

First, the reaction his men have when they find he’s returned. Mortarion does not seem to be loved by his legion, they are all pretty apprehensive about him when he arrives. He’s a bit scary, and while they admire him deeply, I didn't sense that Mortarion evokes the same passionate loyalty that Horus or Gulliman inspire in their men.

The second point is that Garro is left alive by Mortarion and Typhon seems to be the one to order his death. The scene between Mortarion and Garro shows the Primarch has a fondness for him, and from Typhon's language he even doesn't have him killed in the hopes he will come over. Strangely sentimental for a dude that models himself on the classical depiction of death.

Not a huge amount of direct douchiness in this one, but I will say one thing.

Hey Emperor, your son drinks poison and walks around calling himself the Lord of Death. PERHAPS HE NEEDS A HUG? 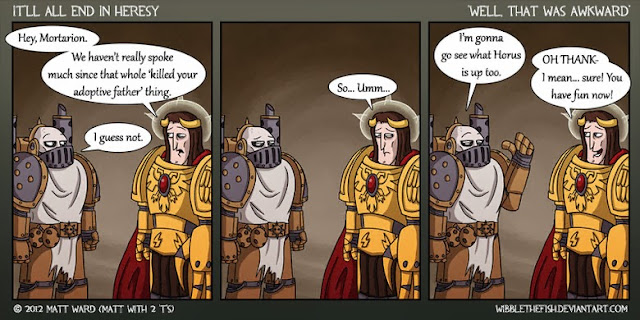 One of the most compelling stories in the book is that of Decius, the young warrior succumbing to a virulent Nurgle plague. The vivid descriptions of Decius agony and the mental anguish he goes through in order to surrender to possession are quite well told.

The foreshadowing, that this is the fate of the whole legion, is played out nicely as well.

That’s a strange statement and I’ll have to explain it. James writes well, his use of prose is among the best of the Horus heresy writing team. He describes events very well and has a natural flare for imagery.

The problem is that “Flight of the Eisenstein” was always going to be a filler story. We know the beginning and the end before we begin. It is a bridge between Istavaan III and the drop site massacre. Considering the brief, and the story he had to tell, I reckon he does a fine job.

This book gets a “You should probably read this if you are reading the series” rating.

Posted by Vomkrieg at 22:13 No comments: