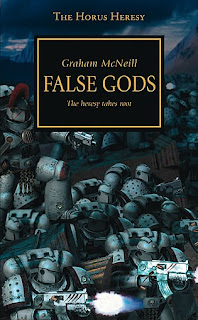 The Great Crusade that has taken humanity into the stars continues. The Emperor of mankind has handed the reins of command to his favoured son, the Warmaster Horus. Yet all is not well in the armies of the Imperium. Horus is still battling against the jealousy and resentment of his brother primarchs and, when he is injured in combat on the planet Davin, he must also battle his inner daemon. With all the temptations that Chaos has to offer, can the weakened Horus resist?

Well the series is called the Horus Heresy so how about no…. no he doesn’t. Seriously, your audience knows what is happening so why try and sell this as a mystery. How about “Hey, read this and find out what made Horus snap and go crazy ape bonkers!”

Well, I did, and that’s basically what this books is.

Abnett did a fine job building the world and setting the scene for this, THE AMAZING BOOK OF EXPOSITION! Inside you find out how Horus fell, and it’s not a bad story. It’s not a great story either as you really have to bang your head on the table at how thick some of the characters have to be to allow events to unfold as they do. Anyway....

Garviel is back as the hero-protagonist of this story and hes starting to get more of a clue. He’s still rigid and inflexible about most things, and his general reluctance to stop and scream “WAIT A MINUTE, THIS IS F***ED UP” to everyone he can find pretty much damns all of humanity.

He does have some brilliant moments though. The scene where he decides Erebus is a completely untrustworthy toolbox and gets the poet Karkasy (MVP from book 1) to observe him during a meeting is pretty gold.

He ahas good intentions, starts asking all the right questions and then falls short on execution. Honestly, I would have preferred if he knew a lot less than he does, as he knows enough to go. ERBUS DID IT; IT’S HIM, HES EVIL.

Not that anyone else would listen, because apparently the Lunar Wolves are a bit thick.

The human characters return and provide an integral part of the story. I really like this aspect of the books and will continue to blather on about it. 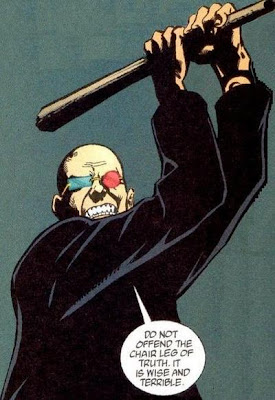 Karkasy is again awesome, this time printing subversive poetry inspired by a massacre of civilians by the Marines. He really reminds me of a favourite character of mine from comics, the mad journalist Spider Jerusalem…. only with less use of a bowl disrupting ray gun.

Sindermann, the head of the remembracers serves an important role (again, mostly exposition) of pointing out to garviel that this magic, hocus pocus guff might actually have real power. The writer does a good show of showing a man of reason slowly giving ground to the idea that witchcraft is real. It’s nicely done.

And Keeler continues her story arc of doom. Her run in with the chaos beasty in book one break her, and she rebuilds herself with faith in the Emperor. This really comes to a head later in the book when Keeler takes her first step along the path to sainthood. Now in 40k they have saints for this and that, but the 30k world is a very secular one. She is the first character to manifest “the Emperor’s divine light” and her arc is an interesting one. Not just because of what happens to her, but because of the reactions of others when they actually see proof of the emperor’s divinity.

I nearly made Karkasy the MVP of the book, but this time it goes to an 8 foot tall killing machine….. the wolverine of the Lunar Wolves

As mentioned earlier, the Mournival represent the four humours. Tarik is sanguine, full of life and vigour. Basically, he’s a cigar chewing, wise cracking, axe wielding maniac, who would probably be at home in a Viking long hall, drinking mead, singing songs about Valhalla and generally being a drunken yahoo.

He’s the funny man to Garviel’s straight man, but that’s not why he is MVP of this book.

He is MVP because he figures out what happened to Horus and that Erebus was probably behind it. Instead of sitting on his hands he walks up to Abaddon and calls him a dick to his face.

That was enough for me to say “Well done Tarik”

Seriously, Horus makes so many bad decisions that he deserves the nod here. Not bad as in “oh the humanity” but bad as in “How bad is your concussion?”

But the loser has to be Abaddon again…. For damning the galaxy through his own stupidity. He swallows everything that Erebus says and then rants at everyone else until they obey, at least Hastur Sejanus has his moment of doubt. Abaddon is quite honestly a caricature. A completely unbelievable character that no one bothered to invest time into as as everyone knew he was going to be evil.

Again, I can only say that the 40k world is safe from Abaddon’s Black Crusades because he’s a moron

“My lord, it is time for another crusade into the Imperium, what are your plans”
“UGH! SMASH! KILL! SMASH! DERP!”


Get to know your Legion – The Sons of Horus

Still don’t get the chapter but at least they have a decent name now and a cool logo.

After being presented as a gung-ho, go for the throat, assault type force in the first book, they are presented more like ultramarines in this book.

When the World Eaters are assaulting a fortress late in the book, the Sons of Horus act with proper combat discipline and boltguns behind the mad swarm of blood crazed Wolrd Eaters. I guess Angrons boys are feral enough to make any legion look disciplined, but I still don’t get what makes the Sons of Horus tick…. What their “thing” is.

Get to know your Primarch – Warmaster Horus

Horus is a biting disappointment in this book, because frankly, he makes such bad decisions…. and obviously bad decisions….. that you have a hard time suspending disbelief.

In particular, is the Erebus baiting Horus scene.

In short, this is how it goes down

Horus : Hey everyone I am freaking awesome I am not!
Erebus: No sir, you are a dick
Horus: Did you call me a dick in front of all these people?
Erebus: No, of course not, another guy called you a dick, I was merely saying what was said
Horus: Who is this person, I want to punch him
Erebus: Oh, that guy, yeah, he’s on the moon, but you’re too much of a pussy to go fight him
Horus: AM NOT! I am awesome! I’ll go smash this guy because you told me to
Erebus: You are wise my lord,
Horus: Right, let’s get to smashing this guy before I can think over how easily I was goaded into this blatantly obvious trap
Garviel: (to self) Perhaps I should mention that Horus is being manipulated and running into a trap….. nah.

At other times Horus is a short sighted petulant child, and I’m talking pre-fall.

For someone who is super-powered he really is a neurotic teenager.

Remember when you found out that Santa wasn’t real?

Or when you first clicked that your parents, on occasion, would lie to you, you know, FOR YOUR OWN GOOD (Or for their own good).

The Emperor is a liar, and he lies about really important things. In this case, he basically lies to the Primarch about their origins. It’s like saying to a child “you are my special son/daughter and you’re mother and I love you” and then finding out that they kidnapped you from the maternity ward.

The Emperor created 20 of the most super awesome baddasses in history, and then flat out lied to them about their origin, and how they came to be.

The final thing that pushes Horus over the edge is when, after the Emperor has told him that the warp should not be touched, Horus discovers that warp powers were used to make them.

If the Emperor has sat his lads down and said… “ok sons, the warp is full of evil shit that will lie to you, mess you up and drive you mad, don’t delve to deep in to it, I tried and boy…. Lucky to make it out in one piece”.  Perhaps they may have pulled through.

Perhaps the emperor believed in abstinence only education as well?

Almost certainly, beause as we all know, the Emperor is a Giant Douche!

This has to be Erebus for the most convoluted, time consuming, easy to mess up plan to turn the Emperor to Chaos.

Seriously, if any steps in his 4088 stage plan had stuffed up he would have been murdered. The fact that his actions are SO transparent and he gets away with it is proof that Space Marines, our hero included, are not that smart…. Unless they become evil.

Graham McNeill is the journeyman of the writing team. You have your star players, your rookies, and your busts, but McNeill is simply solid.

He rarely has an amazing turn of phrase or great characters, but the writing is solid. The story builds nicely from book one, and asides from some of the characterisations (Horus and Abaddon) the book is a good enough read.

It also features the fall of Horus and for that reason it’s a must read. It’s not good enough to be a great standalone book in it’s own right, but it is a solid addition to the series. 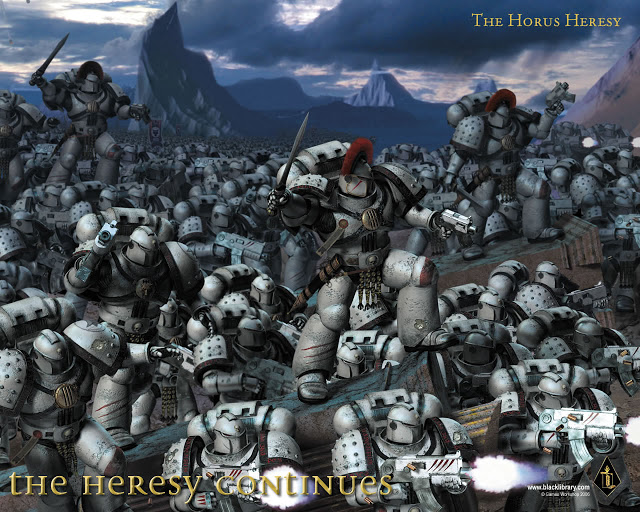