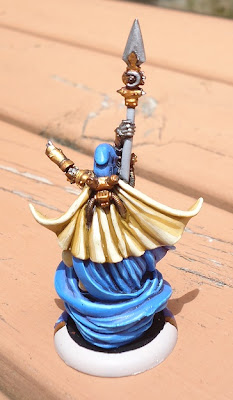 Both the model and her effect on the table are simply awesome.

Any astute readers with memories longer than a goldfish (actually gold fish have ok memories, so lets change that to anyone with a memory longer than a politicians in regards to their own blunders) will recall that I love painting robes and cloaks.

I really enjoyed painting this model, and if anything I skimped work on the body and weapon to focus on the flowing cloak bits.

The technique is highlighting at its purest. Start with a dark colour and use progressively lighter highlights as you paint the parts of the model the are closer to the top.

If you're having trouble visualizing what to highlight, try spray painting the model black and then applying a light grey or silver dry brush to the model. The high areas will pick up the drybrushing and that should act as a highlighting guide.

In game Epic Haley is beyond stupidly powerful. She is arguably the best warcaster in any faction. Her feat is a complete game breaker, she has high focus and a fantastic spell list on top of a warjack bond and the ability to copy opponents spells.

She won't beat very many enemy casters into submission with her fists, but as a support caster she right up there.

I've only used her twice in games so far and shes won both of them. If anything she was so good by herself that i barely put any thought into my list. Just pick random models, add epic Haley  and you've probably got a good shot at winning.

Coming up soon, Epic Nemo and a break from Warmachine painting.

Posted by Vomkrieg at 14:19 No comments:

Harlan and Piper - A tale of two paint jobs 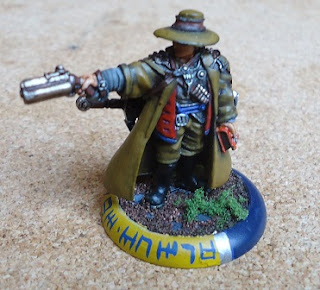 Seriously, I love just about everything to do with this guy. Check out that hat and coat, nothing says "I AM A BADASS LONER WHO LIVES BY HIS OWN RULES" like a dust coat and puritan hat.

Who needs a revolver that big I ask you?

Harlan Versh does so that he can punish the infidels and burn villages of Menoth scum to the ground. 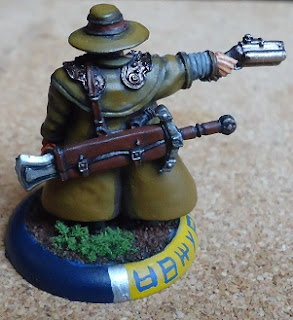 This guy was a pleasure to paint, I always love big coats and the leathery tones on this one worked a treat. Starting with Scorched earth, working through to snakebite leather with a touch of bleached bone in there.

A little splash of colour on his waistcoat completes the look.

In game, Harlan can be awesome or a waste of space. If your opponent uses a lot of buff spells hes dynamite. If not, he just another mook with a gun. (A well dressed mook with a cool looking gun though) 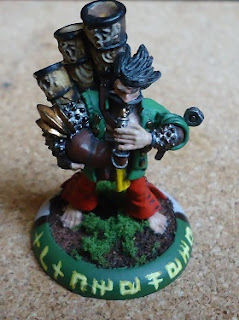 The good thing about the Piper of Ord is how we works on the table. He's a cheap solo with a lot of options to make units tougher, faster, and nastier.

His problem is that this model is old and a very shitty sculpt.

I hated painting him and pretty much gave up 75% of the way through. As you can see its not my finest work.

I don't know what it is but this guy almost single handedly killed my desire to paint.

My painting demon returns with a vengeance and I shall give you Major Haley..... and her pretty as robe of swirliness!

Posted by Vomkrieg at 20:58 No comments:

Well, back to the essence of the blog... THAT'S RIGHT PAINTING AND GAMES AND STUFF!

I'm closing in on my last Cygnar Warmachine post for a while. I only have a tiny handful of models left to paint and i'm not planning on buying anymore until the New Year. Looking forward to branching out and painting some of my boardgames for a while

The Storms Smiths were fun to paint, and really really simple. Long flowing robes are a joy to paint as you can just ink the recesses and highlight the ridges and they look pretty fabboo. I pretty much just copied what I had done on the Storm Strider (To the point of having the Strider sitting beside me while I painted these guys)

You may not notice it, but these guys were really really rushed in order to get them on the table for A Call to Arms.

Fortunately, they are really forgiving models to paint so they turned out all right.

I recommend them for any Cygnar player. At 1 point each they are a great way to fill out an army list (Got one point over, just grab one). They also work very well with the StormWall and I wont field that big boy without them.

The ability to hit enemy models using a skill roll instead of a to-hit roll is great for targeting high defence, low armour models with stealth, cover or concealment. That's most of the units in game that give me grief.

Posted by Vomkrieg at 21:02 No comments: