Well, its been a while since we updated for numerous reasons. A few people have been away on business trips or personal holidays, and our one of our players is also a new dad since the last update! So a heap happening in "real life" and that's more important than the fate of Talathen sector :)

Things will be getting back to normal in the next few weeks, so I thought I would write up the battle reports that have been sitting around idle for a few months.

I'll do some very short write ups for the first 3 missions, and a lengthier one for the finale. (I didn't have my camera for some of these, so less photos than normal) 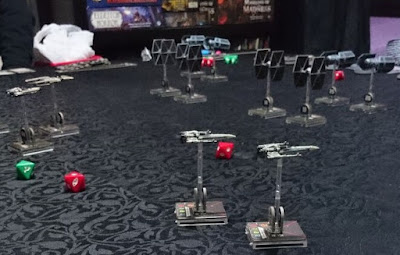 With Luxon now under invasion, the Rebels made some efforts to slow the attack down. A unit of wookies were deployed to support the resistance, and one of the Headhunter squadrons was assigned to interdict bombing runs made on Luxon positions. 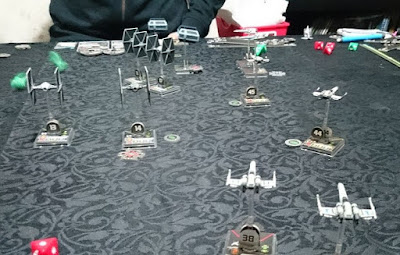 This scenario was as follows. Each bomber had a total of 3 bombs/missiles. Each unused bomb or missile that made it off the board was a VP for the Empire, each bomb/missile used by the Empire or unused when the bomber was killed was a VP for the Rebellion.

This was a great little battle, with the Headhunters dueling with the Tie Fighter screen while the Bombers tried to push through.

One pair of bombers were annihilated in short order after using their missiles once ganged up on, giving the Rebels 6 VPs. But the second pair flanked right and went full speed for the edge, covered by a pair of ties. While the Headhunters pursued and landed some hits on them, it wasn't quite enough to stop them. 6VP's to the Empire and a tied scenario. A nice close game.

Harassing the blockade of Zenith

With Zenith under blockade, the X/Y wing squadron was deployed to hamper it's effectiveness. To this end, they targeted a group of deep space "hyperjump scanners" that would notify the Imperials of incoming ships from Hyperspace. 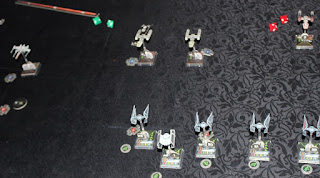 The Rebels were over matched in this fight, 3 Y's and an X vs 4 interceptors and Snattercat, the local Tie Advanced Ace (A fully kitted out ace with vaders card).

In a smart move, the Rebels ignored the Ties and focused on their objectives. Going full speed for the transmitters, they destroyed them easily, although after exposing their flanks to the Ties they did suffer some causalities. 2 Y-wings shot down, but 100% mission goals completed.

One of the things with scenario play is that you can have overwhelming odds if the objectives are finite enough and it's still winnable. 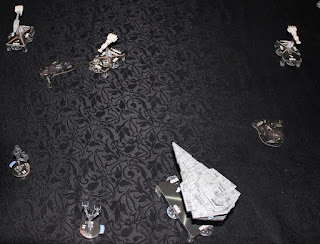 One thing that concerned the rebels during this rounds planning was the actions of a Victory Star Destroyer in Samoth. It was launching probe droids in the area and appeared to be searching for a hidden rebel base.

Instead of just letting this happen, the rebels decided that if they attacked the Star Destroyer, it might intensify search efforts on a planet where the rebels have no bases or major support. 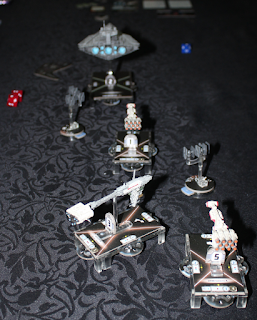 The plan was to hit the Victory with 4 correlian corvettes in a drive by attack. Unfortunately, I forgot I only have 3 Corvette models and forgot to ask my players to bring a 4th, so we subbed in a Neb-B from the fleet for the other 2 corvettes. 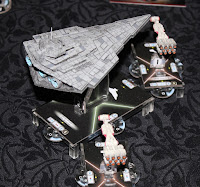 This battle was quite interesting, with the rebels harassing the Victory but staying clear of it for the 1st half of the battle. That changed when the Victory surprised the Rebels by quickly turning and accelerating to escape.

Of course, it wasn't fast enough to escape the engagement zone before taking too much damage, and in a final effort turned back to engage the corvettes with a broadside.

And yet again, a Victory destroyer is rammed to death by Corvettes.

Mission sucessful, although the Victory did put a fair amount of damage onto the attacking ships in the process. This will certainly get the Empires attention.

Good to be back typing this up, next time, the dramatic assault on the Imperial Asteroid base orbiting Selano, and the amazing climax to the best battle of the campaign to date.

Posted by Vomkrieg at 15:21 No comments: 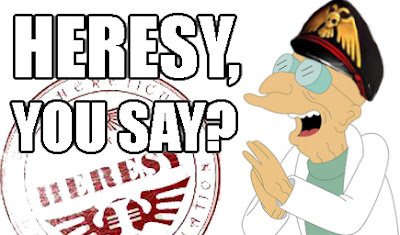 Two things to look at today, one is how melee weapons work and the other is worked out ranged combat.

We have developed some basic statlines for models from our previous post, and here they are.

Let’s keep these stats in mind when calculating relevant weapon strengths and special abilities as we want survivability to be comparable, and we want the weapons to “feel right”. Now they won’t translate over perfectly, but that’s ok, as long as they “feel right” it works for me.

Close Combat Weapons – Guns for show, knives for a pro

Most close combat weapons in WM range from strength 2 for a small knife, through to strength 8 for a giant two handed magical axe of doom.  Strength 5-6 seems normal for a standard dedicated melee weapon.  It’s also worth noting that every nearly figure has a close combat weapon of some type, even if it’s a boot knife for a guardsman.

There are also a lot of “special abilities” we can use, like grievous wounds (ignores tough), Weapon master (additional damage), Armour piercing (halves armour), Critical brutal (extra damage on critical hits) and many others.

So, let’s throw together a table of sample melee weapons, we will ignore pistols for now and do them later.

Ok, some basic ideas there. A guard with a knife has a very small change of killing a marine without a charge, and no chance against a terminator. I’m fine with that. Weapon master for power weapons is probably a better way of representing how good they are, overgiving them pure “armour cracking”. It means they are great weapons, and very good at chopping up power armour infantry. But not quite as brutal against very heavily armoured targets.

Power fists and Thunder hammers need something to represent the “go last” rule in 40k.
Cumbersome works, it takes away their pistol attack after the charge round, reducing overall attack power. But when they do hit, things go smoosh.  A regular marine has zero chance of surviving a direct power fist hit, but as most marine models already have 2 attacks in 40k, and have given one up in this system, so that sounds fair to me. 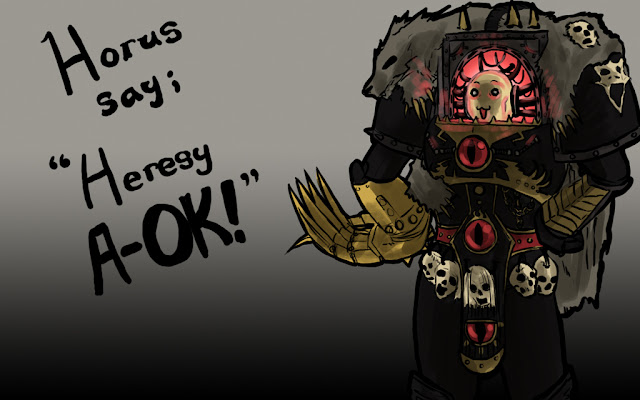 Ranged weapons – Don’t bring a knife to a gunfight

First of all, the big elephant in the room is range. Very few weapons in WM have a range of over 15”, most basic infantry weapons in 40k have 24” range.

My solution is to keep the 40k weapons at their current maximum ranges. A lascannon should be able to hit something across the table. The change will be in introducing range bands.

We will break most ranged weapons ranges into 3 bands, short, medium and long. At short range, there is no RAT penalty, at medium it becomes -2 and at long range it is -4. Standard guns like lasguns and Bolters will only have short and medium ranges, we will reserve long range for heavy support type weapons.

Now with higher defences and cover out there, you will be unlikely to snipe out a guardsman in cover at max range with your lascannon. But you will probably still hit a tank out in the open. Standing still and aiming will still give you the normal +2 to hit which will mitigate some of this.

Assuming a tank will be Def 10, a guardsmen aiming at long range with a lascannon will hit on 7+ on 2d6. About as often as they hit anything now. The same shot against a guardsman in the open would be 10+ and against a guard in cover, a natural 12.

The basic weapon strength will be 7+40k weapon strength. This will make the weapons slightly more deadly than 40k, but you are hitting less often so it should work out.

Pistol – Can be used in close combat and with other melee weapons, does not get charging bonus on damage.
Rapid fire – Can be fired twice in one activation, at -2 Rat for both shots. It becomes a tactical decision to fire twice rapidly, or once for accuracy. I quite like this idea.
Heavy – Cannot move and fire weapon, but can rotate on the spot (I dislike that rule in WM and I think a man portable lascannon should be able to turn and still be accurate)
Assault – Can use the “assault” rule and fire at its charge target before melee.
Standard – Functions like a normal gun in WM, some “assault” weapons in 40k would be broken in WM rules if you could charge with them. Flamers to be precise.

A handful of special rules added in, but not much.  Next up I’ll be looking at building hero characters and then doing a “bare bones” space marine list, without vehicles to start playtesting.
Posted by Vomkrieg at 16:59 No comments: