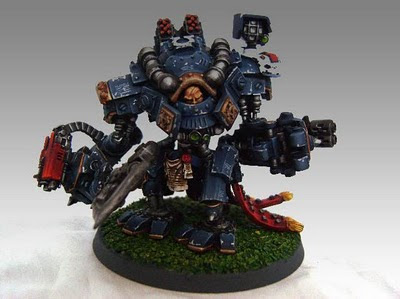 I found this crazy conversion on a site called www.tanksandtrolls.co.uk

It's not my work at all but it's a fantastic blending of a Warmachine model into an Ultramarines army. It's simply a breathtaking conversion and would look stunning on a table.

It got me thinking about the two games.

At the heart of it, both games are miniature based wargames with pretty cool background material and legions of die hard fans. Some people are solely in one camp, while others play both equally.

In some ways its like the epic debates that have no real definitive answers, you know the ones

There cannot be a definitive answer because, in the end its just a personal opinion.

So, I'm going to look at the games and offer my personal opinion. Why? Because I like both games, but they are very different beasts. Most of the comments i've seen online about the topic have been written by people firmly entrenched in one camp.

That being said, these days I am very much favoring Warmachine. So some bias will inevitably creep in.

Part One - The Models

Warhammer 40k is Games Workshops flagship and they have been improving their craft for decades. The models have been getting better over the years, and some of the later releases have been simply breath taking. Of note are the really good plastic kits with plenty of options and the new finecast models.

That being said warmachine has covered a lot of ground since it was released. Some of their designs have been too over the top and just looked a bit silly really..... Lich Lord terminus, im looking at you as a prime offender.... bad Lich Lord!

But they are getting better at privateer press. Plastic kits are starting to emerge and they are redoing some of the older sculpts to a higher standard. While I think GW has the lead here and finecast looks very good the gap is closing. This is especially true now that Warmachine has such amazing models as Constance Blaize and the awesome Colossals. The gap is very small now but it's still there.

Warhammer 40,000 has a long and storied history with decades of material to read about. An epic universe with many factions and plots it has great imagery with its grim future full of fanaticism and war. This long legacy is one of the problems with Warhammer 40k. While its detailed and vast, its also inconsistent and prone to being retconned. 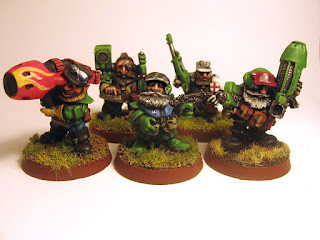 But seriously, squats did suck and I would have gotten rid of them as well. But this isn't the only case where things have been retconned out of existence.

One of the fears I have with my Sons of Medusa army is that in the next edition I wont be able to field my Master of the Forge on a bike. Lots of characterful units and forces have disappeared over time and well, it kind of bugs me a little.

Warmachine might not have the epic scale of Warhammer 40k, but it is far more internally consistent. The characters have evolved over time with the story and they have even introduced experienced versions of key characters with updated abilities. They have never removed anything though, and this means whatever you have purchased is still playable.

The Warhammer codexes have gotten a lot better lately, with background and more detail. The 3rd edition codexes were a bit thin. Warmachine slays them with the Forces of Warmachine books. Full colour, with amazing artwork and they are completely optional. You get a character card with the models with their points and stats on them when you buy them. So you only need to book for the fluff or the handy thing of having all the army in one.

All in all, I like the 40k setting a bit more. It's dark, its epic, its Gothic and its cool. Warmachine is a little on the anime side for me. But the consistency of Warmachine and its supporting books makes up for it.I also like the character development, I'm a fan of Epic casters and their Epic storylines.

This one is a double edged sword with both camps having some really good points and some negatives.

First of all, GW has the stores. This is a mixed blessing as they can be really good for some matters and worse than awful for others. Got a painting question, they will help you out. They will push their product but that's their job (Sometimes they oversell, which pains me a lot as I hate having product pushed on me). Just don't ask them a modelling question about something they don't carry in store (Airbrushes.... what are those, all you need is this Citadel paint gun...... THIS HAPPENED TO ME)

They do a very good job at promoting their games, supporting new gamers and helping people connect for games etc.On the downside they do stifle any other games in their area, its GWs way or the highway. Still, the stores are very handy for picking up supplies for any form of modelling.


Privateer press has it's press gangers, a group of people who help you get into the game. When I first wrote this I hadn't met a press ganger and had no idea what the experience would be like.

I'm sure this varies a lot depending on your community but our local press gangers are awesome guys. I've even met one of the gangers from another town and hes pretty damm cool also. So far they have helped me learn the game, introduced me to gaming groups, invited me to events, exchanged emails on tactics and ideas and even driven me to games and events. Our local community is awesome and really inviting. Your millage may vary but my experience has been awesome.

There's no store support, and most of the advice i've got has been in the gaming area not modelling. that being said I think i'm not too bad at the old painting lark these days :)


Privateer press allows a lot of freedom online with its materials. Games Workshop are quite frankly ********* when it comes to people trying to build communities away from the stores.

www.boardgamegeek.com received a cease and desist letter to remove all GW materials from their site, people had done the terrible thing of making play aids and writing guides had their materials taken down.


This comic, posted under the entry for Space Hulk summed up what was going on. For the rest of Alex, Seth and Grun comics on board games, go HERE NOW DO ITS!

There was a mighty backlash from fans of their games and a lot of ill will was generated by this. Games that had been out of print for 20 years had play aids removed, and it just seemed ham fisted and over the top. Compare that to battle college an approved warmachine fansite that probably contains too much information on it.

So in short, Games Workshop stores are pretty good if a little pushy at times, Game Workshop lawyers are ******** and privateer press is very laid back about the whole thing but supports the community to do its thing.

This post is getting very long, so in part two i'll look at the actual gameplay and how the games differ.

*Note* Post updated and edited from original version
Posted by Vomkrieg at 23:48