The last few weeks have gone a bit slower than expected due to my players being ill, so it's been a while between updates. However, here are all three battle reports from the last two weeks.

The empire has been converting a civilian dry-dock into a military drydock. The implications for the rebellion were quite dire, as it would mean faster turn around time for Imperial ships, and therefore, more patrols in the sector.

The drydock was also big enough to handle Imperial Class Star Destroyers, and Fleet Command wanted it blown up at all costs. The first attempt, a sabotage run was blown almost immediately as the empire were waiting for them and the operative was nearly captured. Throwing all caution to the wind, Fleet command threw everything they had, and everything they could borrow at the problem. 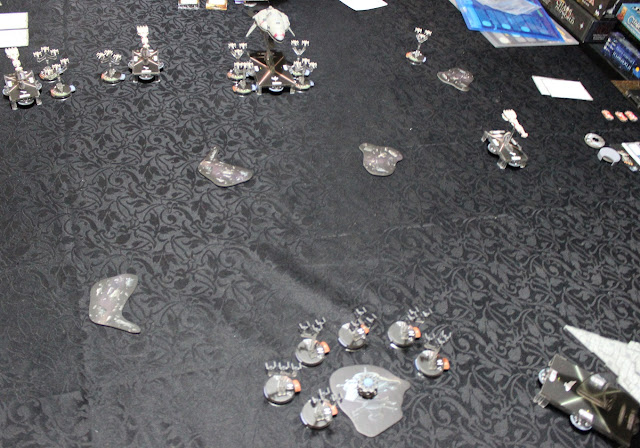 As our sector fleet is quite small, everything was a Borrowed Assault Frigate from The Alliance Fleet Command, 3 Cr-90's and 8 stands of Z-95's.

The objective was represented by the space station with 6 shields. That could take any amount of damage after that point, but would be destroyed on a single critical hit.

Opposing them was one Victory Star destroyer, and 6 stands of tie fighters.

Sounds like a horrible mismatch right? The rebels were deeply suspicious of the table deployment, of the fact they had initiative when they didn't buy it, and the fact i'd asked one of them to bring his spare gladiator.

The rebels came in fast, faster than I initially anticipated, and went straight for the objective. Then i revealed the hyperspace markers under the debris fields and deployed my gladiators behind them using hyperspace assault. 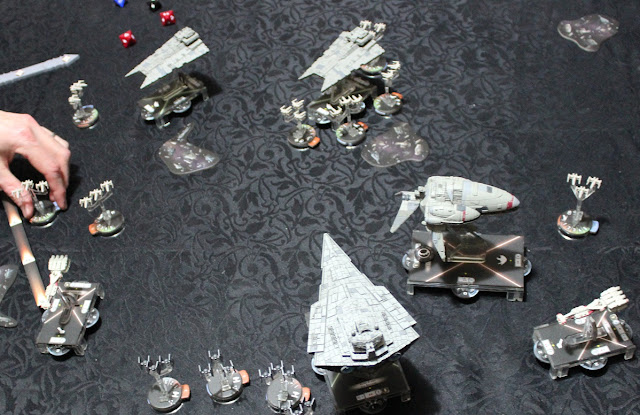 A classic tactic, with one massive flaw. I brought them in too slow, so they got one round of shooting before the rebels darted away from them. 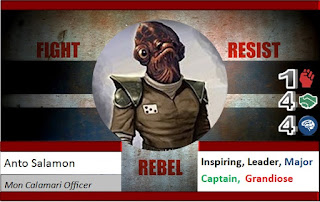 However, in that one round I annihilated one Cr-90 and badly damaged the Assault Frigate. The Captain of the CR-90, Anto Salamon, went down with the ship and was presumed dead.

Although recent information suggests he was captured alive. Poor Imperials, Anto is known for being a pompous arrogant jerk and will no doubt regale them with stories of how the Rebellion will be diminished with his loss, as in his mind he "Was the best of us".

Things look grim for the rebellion until turn 3, when the whole mission changed on a single dice roll. Taking his pile of red dice, Airen Cracken commanded the damaged assault Frigate to open up on the drydock. And in one volley of fire, all 6 shields went down. The Imperials were very concerned, until his second volley failed to produce the kill shot.

However, two CR-90's were rapidly moving into range, and a volley of turbolaser fire from those two ships produced the critical result needed for victory. 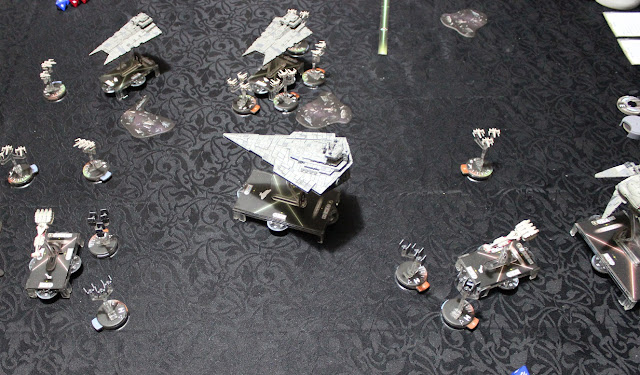 Slow to respond and turn, the Imperial fleet could do nothing to stop the high speed rebel force from disengaging victoriously.

This was probably the best mission of the campaign, as it felt like the rebels were doomed when the Gladiators appeared and ripped into them, but they stuck to the plan, kept on moving, and punched a whole through the defences, killed the target and fled with the loss of only one ship. 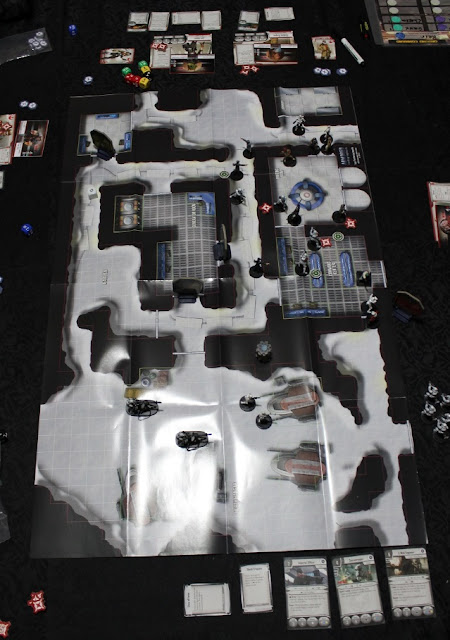 This mission took place at a hidden hangar facility near the polar icecap of Zenith.

The Alliance received intelligence that a small number of Republic era fighters and other contraband was being stored in this hangar.

The plan was to infiltrate a special forces team into the base, clear the way of resistance and escort pilots to the fighters and have them escape with them.

This was our very first "two-part mission", as we also played out the escape from the planet using X-wing.

It's worth noting that the picture above is at turn 4 (I forgot to take pics earlier). By this time the rebels had got very busy and had gunnerd down a rather high number of Stormtroopers.

Yep, 13 models taken out in the first 3 turns. That's some busy killing going on. 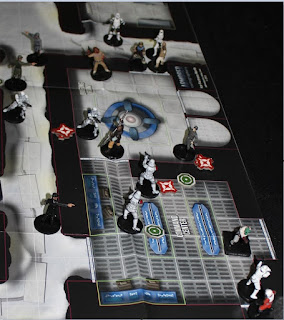 The Special forces team split into two groups. Hallarn (Commander), Keel (Sniper) and Fenn (Himself) acted as a firebase, coming in from the north entrance on turn 1.

Gooda (Gunfighter) and Gaxx (Wookie) come in through the side entrance on turn 2, with the pilots following behind them on turn 3.

Virtually every shot was a kill by the rebels, it was uncanny. I expected the sheer number of troopers to slow them down, but it really didn't. And while I managed to wound two characters, this mission never looked like it was going to be anything other than a rebel victory after turn 2.

I cam quite close to killing/badly wounding Fenn When he didn't take into account my officers moving the E-Webs and their double shots. But ended up 2 points short (The amount his new armour protected him by.....)

The conclusion from this battle is a minor rules change. Due to Rebel characters being able to heal themselves easily when the pressure is off, I am changing the "no reinforcement" option to "delayed reinforcements" for Imperial Assault.

The Rebels got all their pilots to their ships, picking up 9 Y-wings (including a couple of the version with locked forward turrets) and a surprising 3 X-wings. In Addition, the astromech droids assigned to the ships had been left installed and had all developed unusual personality quirks. (Each of the unique R droids for X-wing was unlocked as a unique card) 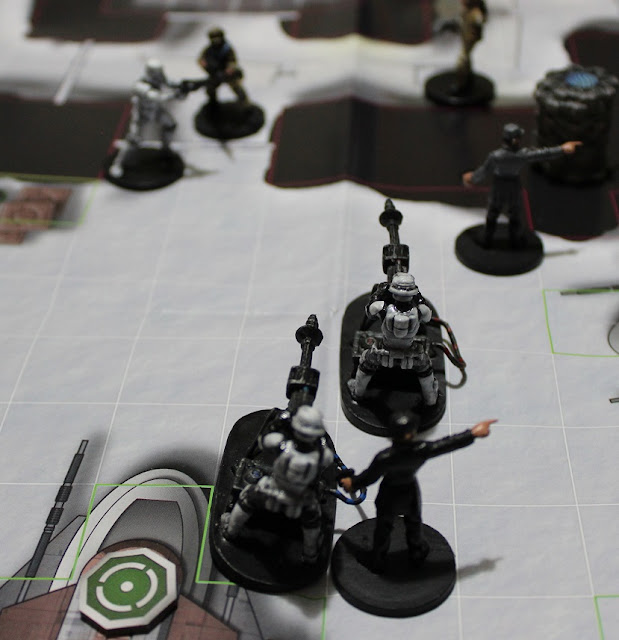 This mission wasn't for high stakes, it was like a "bonus round" for the first 3 rounds of the campaign (the first quarter if you would as the campaign will last 12 rounds............ oh wow...... John Cena reference).

The Rebels massively outgunned the Imperials, and the idea was a mini-competition to see who could kill the most Tie-fighters.

Each player got 2 identical ships from the following options, once one option was gone, a player had to pick another, and they picked in "reverse glory" order 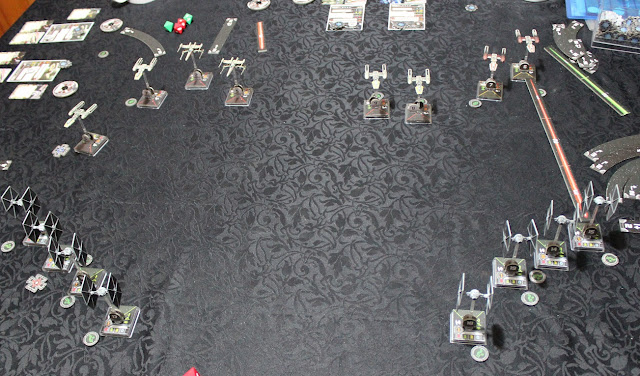 I preplanned the Tie Fighter squadrons moves before the game. Fly forward on turn 1, turn in on turn 2, and cross on turn 3, k -turn back on turn 4. 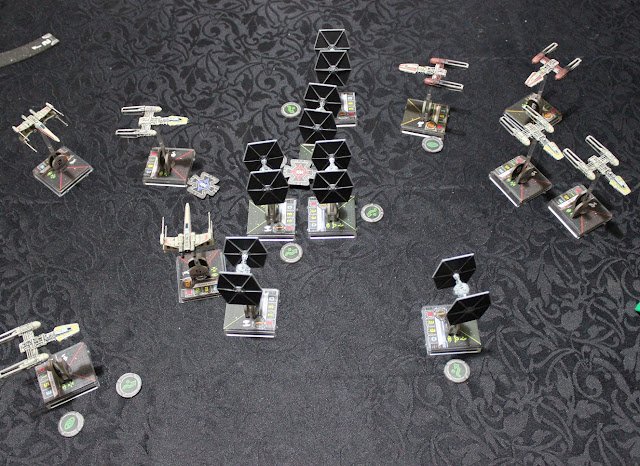 Very tidy formation playing if i do say so myself.

Still, the idea was to give the guys a final "hit-out" for this section of the campaign, let them experience the new fighters (and cheer for making the Z-95's obsolete).

A 2 to 1 points differential in a game makes for a really funny and quite different experience.

Round 3 will conclude with one and a half roleplaying session, followed by the end phase. Then the campaign will take a break for a month or so.