I started playing 40k back in the old Wild West days before it became the soulless megacorp we love to hate. Rogue trader was fun, though it was a mess of a system, but it contained some real gems in its background (along with a pile of crap).

It was in this era that I bought my 1st two stand-alone GW games, Space Hulk and Blood Bowl. These games still represent to me what GW can do when it gets things right. The other game I got into was Space Marine 1st edition.

This game was 6mm epic scale battles between armies of Marines, set in the 30th millennium, during what was to become known as the Horus Heresy. I loved the civil war concept and the fact all players had the same list to choose from, it was pretty much Space Marines & Land raiders, not much else. But it was the setting that intrigued me.

I've always preferred 30k to 40k. I guess the theme of "brother vs brother in an age of heresy" does more for me than " 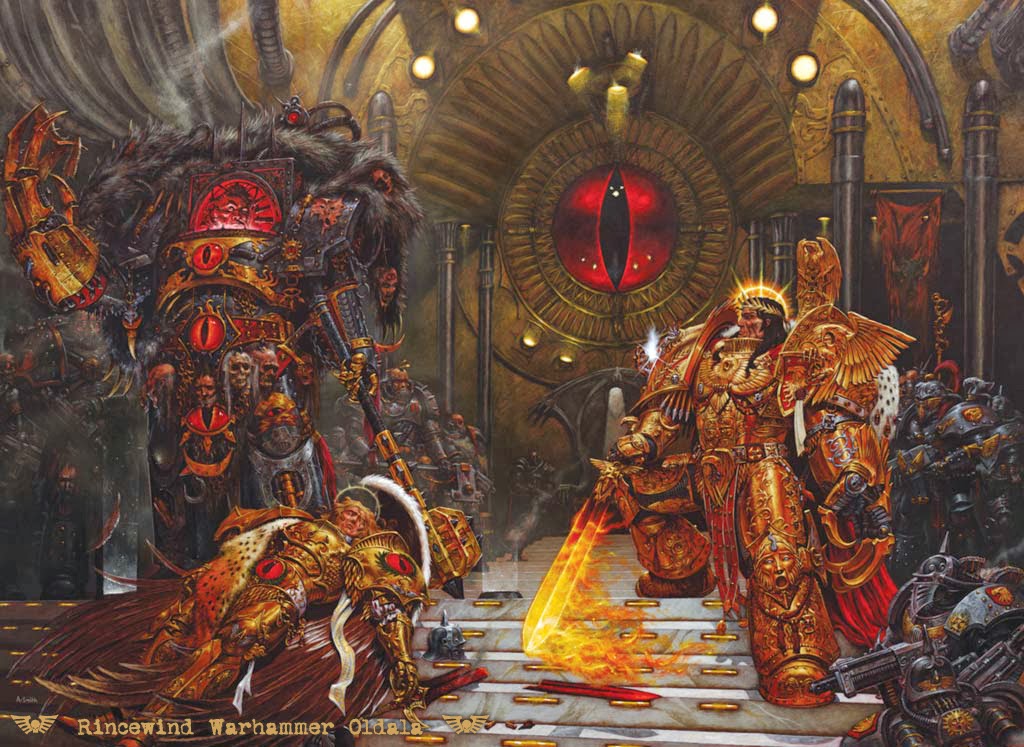 Over time that setting has been developed, reworked and rebuilt more times than I can shake a stick at. The core concepts remain though. The Emperor created the Space Marines, 20 different legions of kick ass super soldiers to help him conquer the galaxy. Each legion had a Primarch, an even more super-powered leader who embodied the core principles of each legion (indeed, the marines were grown from the Primarchs).

Some wacky misadventure in time & space caused the Primarchs to be stolen away from their growing chambers while still infants and scattered across the galaxy. While conquering said galaxy the Emperor finds all his lost lads and reunites them with their legions. Good times are had until the Emperor appoints his favourite Primarch (Horus) to the title of Warmaster and puts him in charge of everyone else.

Horus goes nuts, declares war on the Emperor, kills a bunch of loyal Space Marines and the galaxy divides into two camps to fight a civil war. Horus looks like he will win, attacks Terra, cripples the Emperor who then promptly kills Horus. The Emperor is left mangled and the entire human domain pretty much becomes a steaming pile of crap from here on in.

These events describe why the 40k world is such a bleak grimdark future.

What the story really is (according to me)


I think the story is a Christian parable in space. It is the rebellion of Lucifer against the throne where all the protagonists are wearing power armour.  Space Marines are already described as the Angels of Death, and have enough Judaeo-Christian iconography on them to back this up. Purity seals, Hymms to the Emperor, relics, Iron Halos, you name it. There is so much predominately Catholic imagery in marines alone to make the angelic connection. And when an angel falls it becomes a demon.... you know, bat wings, fangs, that kind of stuff.

This of course makes the Primarchs the Arch-Angels. The Arch-Angels have normally been portrayed as exceedingly more powerful and influential than any individual angel. Archangel Gabriel, for example, heralds the birth of Jesus and recounts the Qu'ran to Mohammad while Archangel Michael is meant to have broken Lucifer’s back and cast him down from heaven.
Lucifer, according to Christian mythology (The war in heaven is briefly mentioned in the bible in revelations 12:7 but most “fact” about this comes from other sources) was the best and brightest of the angels. Various versions of the story revolve around one core concept, that Lucifer’s pride caused him to rebel against the throne of god, and that he and his allies (fully a 3rd of the host of heaven) were defeated and cast into hell.

Horus is Lucifer, the best and the brightest of the Primarchs. He, through various actions, opens himself to temptation, in this case the forces of Chaos. Through his power of persuasion he brings fully half the host of heaven (the Imperial military) under his sway and begins to assault the throne (Terra). Finally, the defeated hordes of Chaos are cast down and exiled to hell.  In the 40k world, we call that “the eye of terror”.
The Emperor is of course God, all powerful and stuff, so powerful that he needs Malcador the Sigilite to speak for him so mortals don’t go crazy. This is comparable to the Metatron, the angel who spoke for God, so wonderfully portrayed by Alan Rickman in Dogma.

Each of the fallen Primarchs also embodies a Christian mortal sin that leads to their demise. Fulgrim is full of pride as he strives towards perfection. Magnus is also undone by pride, in his case believing he can master dark arts and dark forces better than the Emperor. Konrad Kruze and Angron fall victims to their own rage and hatred. Peterabo and Mortarion are undone by jealousy of their brothers. Lorgars fall is triggered when he love for the Emperor is spurned, driving him in to the arms of Chaos. Finally, Alpharius is tricked into falling through his own suspicions and isolation.

Why this makes the story cool!

Each Primarch and each Legions fall is told in such a way to highlight their mortal fragility and the human nature of their sin. The battles might be epic in scale, but the tragedy is frequently presented in very human ways.

The story is epic, it spans hundreds of years, has a cast of thousands battling across thousands of worlds. But it is the mix of epic scale and real humanity that makes the Horus Heresy a lot better than it could have been. It could have been dull as shit: “I get magic sword, it makes me angry, I fall, SMASH EMPEROR! CHAOS GOOD!” fiction. The writers, for the most part, avoid this obvious but easy pitfall and attempt to write real people. This is a very good thing.

So far, it's 20+ books, each with a different perspective and story, all building into a massive narrative. Yes, we know how it all ends, but that’s not the point. The journey is far more interesting than the destination in this case.

My reviews, what to expect

I plan to recap and review each book. I don’t want to do the traditional “I give this 7 oblongs out of 10” style review. I want to look at how the writers, as a team, build the world. How they build characters and make you feel for characters that are essentially immortal 10 foot tall giant wearing power armour with retarded names like ROBUTE! I want to explore the failings and successes of each story and how each book is an individual brush stroke in the Horus Heresy painting.

These reviews will not be for people who haven’t read the books as I will talk about all the key “big stuff” that happens. Why they are important and what implications they have on the series.

At its best, the Horus Heresy series is A Game of Thrones in space ... at its low points it's freaking Commando comics in space. The series benefits and suffers from its “panel writing” approach. Some writers are gold, Aaron Dembski-Bowden and Dan Abnett stand as giants in this writing team, but they get sorely let down by the team at times.

So, join me as I embark on this process of examining the heresy. Join in with comments and critique. Let’s discuss the crap out of these books.