Card games – Collectible vs. Living (or... how magic is the great satan)

Collectible card games are the devils work, and Magic the Gathering is the GREAT SATAN.

I can hear fans of the game wailing and gnashing their teeth, but it’s a simple brutal truth.

Few things are as financially crippling as a MTG habit. Addicts spend their time in a daze, waiting for payday to buy another booster just to get that “Blue Eyes White Dragon*” they've been craving to complete their super deck of doom. The rush of opening a pack, the lament at seeing a pile of cards you already have and a crappy rare no one wants to trade.

Magic the Gathering has one big thing going for it.

Satan’s own finance model aside, the game-play has that brilliant combination of easy-to-learn and impossible-to-master. There are multiple paths to victory, millions and millions of card combinations, and a seemingly endless variety of tricks, strategies and card interplay to explore. The game is a master piece.
Satan’s own hand is on it, that much is self-evident.

I was once an addict like you, spending my hard earned (well, that’s a stretch, but it was money I could have used on other things) on Vampire the Eternal FREAKING struggle cards. I spend a fortune on that game and do I play it anymore?

NO ONE PLAYS IT ANYMORE!

But there is another option, A way to get your card game fix without shelling out half a house deposit on cards that won’t be useable in a few sets time (MTG tournament rules exclude the older cards… makes business sense after all….. IF YOU’RE SATAN).

Fantasy flight game developed a new business model for card games a while back, and I think whoever game up with it deserves a nice yacht or something similar…. an aircraft carrier to cruise the Caribbean perhaps?

The living card game is different to the collectible card game. It was clearly developed by someone who had sunk a lot of cash into MTG and was left feeling cheated, dirty and crying in a shower.

The fundamental difference between the two models is you know exactly what cards you are getting in a booster pack, and you only need to buy one of each booster to get all the copies of a card you will need (unless you’re crazy).

The starter boxes come with enough cards to make some decks, and each booster so far comes with 3 copies of the 20 cards in that set.

No digging through boosters to get that rare you want. You buy the booster and get 3 copies of everything. BOOM! Just like that.

You still get the fun of unboxing the cards, reading what they do and figuring out how to use them.

Each game also has a drip feed release schedule, one booster a month, at about $20 NZ a pop.

Now if you get into one of these games, you can still sink a lot of money, but it will be over time and eventually, once you catch up to releases it will be $20 a month. That’s less of a crack habit and more of an occasional joint at party’s type habit.

What LCG’s are there? 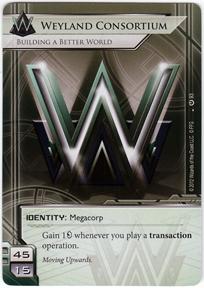 Fantasy Flight games have six on the market right now, and they are targeting some pretty strong fandoms. I own two of them, Netrunner and Star Wars and they are both excellent games.

Netrunner is a cyberpunk hacker vs. an evil mega-corporation in an asymmetric game of bluffing and deduction. Netrunner is currently the 5th highest ranked game on Boardgamegeek, if your serious about card games, it’s a must try. Also, one of the corporations is Weyland…. Of Alien fame.

Star Wars is another asymmetric card game, with a predictable rebel vs. Empire theme. The gameplay however is wonderful, and it is the first card game I have come across that does not have “bad cards”. I’ll review the game another time, but it’s a hell of a lot of fun and I rate it highly. Also on the list are Call of Cthulhu, Warhammer Invasion (for all those GW fanbois), Lord of the rings and A GAME OF THRONES.

Yep, FFG got Cyberpunk, Warhammer, Cthulhu, Star Wars, LOTR and AGOT. That’s targeting a lot of geek fandoms, and I’d be surprised if anyone reading this isn't a fan of one of those. 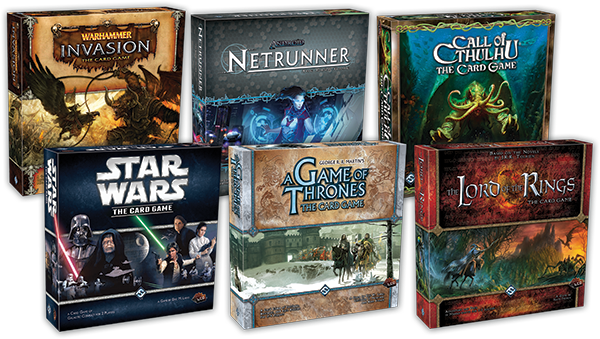 So, go online, look up the rules for the LCG and buy a starter box. You’ll save roughly bazillion dollars by flogging you magic cards off online and picking up an LCG instead.