For King and/or Country - Axis and Allies anniversary edition

RULE BRITANNIA
BRITANNIA RULES THE WAVES!...... and so forth

First of all, this faction is not Britain, its not the United Kingdom, its the entire British Empire and Commonwealth of nations. 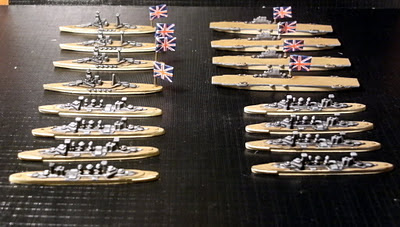 I say this as a New Zealander, on behalf of  all the nations around the world that fought under the banner of the British Empire. This is also why I played around with the skin tones on the British infantry pieces. I also picked the 8th army desert colours for the infantry and tanks. This was mainly to make the faction distinct on the board.

The British fleet flags are really easy to do. All you need is the wire and drill you use to base planes , some white paper and pva glue. Just cut out some paper, glue one side and bend it around the wire. Leave it to dry and then paint one side at a time. Once painted just drill a small hole in the ship and glue the flag in place with superglue.


Not the best pic of the RAF here, but I used the classic colours on the Spitfires and Lancasters.

The paints used in this set are