Sons of Medusa – It ain’t easy being green 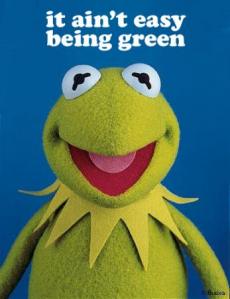 Alrighty, so the current project is a Sons of Medusa army for Warhammer 40,000
I’m already under way but I thought I would outline why I chose these guys.
I chose them for one reason and one reason only, that amazing shade of bright green.
Oh sure they have some cool fluff and some back story but none of that was around when i initially wanted a Sons of Medusa army (not long after the release of the 3rd edition space marines codex).
Seriously, that green is just that compelling.
Ok, so i clearly have a thing for bright colours, but beneath that shockingly garish exterior beats the heart of an Iron Hands successor chapter.
Now the Iron hands haven’t been given enough love in my view. They diverge significantly from the codex astartes, operate in war clans instead of companies and have close ties with the mechanicum. They also have a thing for ritual self mutilation and replacing flesh with technology.
So creepy technophiles with masochistic tendencies, that’s definitely something to work with.
According to the back story the Iron Hands are from Medusa and during some civil disorder in the mechanicum the Iron Hands split over ideological views. The majority stayed Iron Hands and the rest left to become the Sons of Medusa trading in their jet black armour for some super green stuff in the process.
Talk about teenage rebellion, “screw you mum and dad, im not gonna wear black, I’M GETTING A LIME GREEN SUIT”
So we end up with an off shoot of the Iron Hands, which seems to have kept similar ideology (Machine good, Warclans, Codex bad,  Techmarines good).
I will leave the exact army build discussion for another post, this is just answering the question “Why Sons of Medusa”
But I will tell you what to expect
I will show you how i plan to paint them however.  The Bolter and chainsword peeps have a handy tool called space marine painter, give it a go 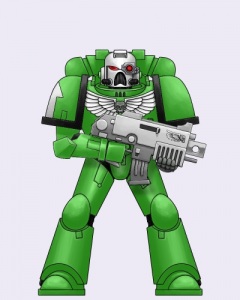 Seriously, its so fun playing around with this thing.
Thats the core look, the bright green on the armour, white helmets, red eyes, white eagle.

The shoulder pads and weapons will probably change depending on the squad. Veterans will have some red to show their link to the mechanicum.